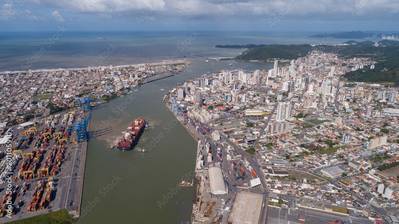 Australia's Macquarie group is investing in Brazilian ports by taking a stake in port operator CLI and funding a deal to buy sugar and grain terminals in Latin America's largest port, Santos, for $260 million, the companies said on Friday.

Railway operator Rumo said in a securities filing late it has sold 80% of its subsidiary EPSA, which manages terminals 16 and 19 in Santos, to CLI for 1.4 billion reais ($260 million). Rumo will remain a minority shareholder.

The Australian fund said in a statement it would own a 50% stake in CLI and share control with IG4. CLI already operates a grain terminal of the northeastern state Maranhao.

Macquarie director in Brazil Fernando Lohmann said the group has invested in Brazilian agribusiness for a long time. "The investment in CLI is a natural step to strengthen the infrastructure connection with agriculture," he said in a statement.

Rumo chief financial officer Rafael Bergman told Reuters in an interview on Friday the sale allows the company to focus on improving and expanding its rail operation.

CLI chief executive Helcio Tokeshi said in the same interview the fact that the operator is not related to any commodity trading company or railway eases its growth and search for new clients for the Santos terminals.