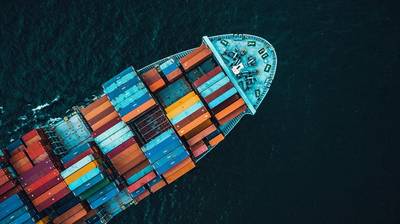 A.P. Moller - Maersk speeds up on decarbonisation with a methanol-fueled feeder vessel on the water in 2023, piloting a scalable carbon neutral product to customers and offering fuel suppliers incentive to scale production of the fuels of the future. (Image Credit: Maersk)

Shipping group Maersk said on Wednesday it would accelerate plans to decarbonize sea-borne container shipping by putting the world's first vessel powered by carbon-neutral fuel into operation in 2023, seven years ahead of its original plan.

"Fast-tracked by advances in technology and increasing customer demand for sustainable supply chains, Maersk is accelerating the efforts to decarbonize marine operations with the launch of the world's first carbon-neutral liner vessel in 2023," the company said in a statement.

The consumption of oil for transportation is one of the top contributors to the emissions that cause climate change and Maersk, the world's largest container shipping company, faces the challenge of ensuring an adequate supply of alternative fuel.

"Our ambition to have a carbon-neutral fleet by 2050 was a moonshot when we announced it in 2018," Chief Executive Soren Skou said. "Today we see it as a challenging, yet achievable target to reach."

The company is beginning with one of its feeder vessels - a relatively small ship that can carry up to 2,000 containers - that will be powered by climate-friendly methanol, although it will be able to use fossil fuel as a back-up if required.

Going forward, all its new vessels will have dual-fuel technology installed, it said.

In addition to methanol produced from plant waste, Maersk said it experimenting with ammonia, normally used for fertilizer, and other alternatives.

Two of the world's biggest fertilizer producers, CF Industries and Yara, said last month they were reconfiguring ammonia plants in the United States and Norway to produce clean energy to power ships.