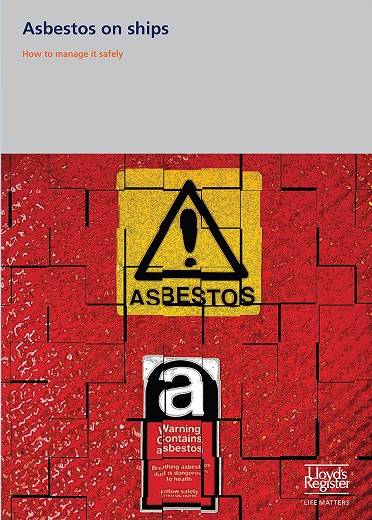 The guide takes a wider look at asbestos, exploring its history, composition and health effects to underline the vital importance of correct management. It also details asbestos-related regulation and suggests tools that can be used to achieve best practice in asbestos management.

Despite better management and reduced production of asbestos, there remains considerable room for improvement, primarily to reduce the number of deaths. It is still estimated that more than 107,000 people die each year from mesothelioma, lung cancer and asbestosis - the three major asbestos-related diseases – as a result of occupational exposure.

The report’s author, Robin Townsend, Lloyd's Register’s Regulatory Affairs Lead Specialist, said, “Far from being a problem of the past, asbestos is still produced in many countries and is still widely used, and it is present in many existing buildings and structures, including ships. Most countries still do not have effective prohibitions and global production is still over 40% of peak values. It is imperative that we see further and substantial improvements in regulatory enforcement and a reduction in asbestos related mortality.”

Ships often have an increased risk of asbestos exposure. The use of asbestos in shipbuilding has been unusually high over the years and some of the most dangerous asbestos application methods have been particularly prevalent in ship construction.

A U.K. study estimated a 61% increased incidence of asbestos related illness in shipyard workers. A similar study in Trieste, Italy, showed that of 153 men who had died of malignant mesothelioma 99 had worked in shipbuilding, 19 had been in the navy/merchant marine and seven had been dockworkers.