Peter Pospiech has served as chief engineer in the German merchant marine and...

"With the conversion of SAJIR, we are the first shipping company worldwide to convert a container vessel of this size to natural gas propulsion."  Richard von Berlepsch, Managing Director Fleet Management at Hapag-Lloyd

In its more than 170 years of existence, the Hamburg-based Hapag Lloyd  has used all kinds of solid and liquid fuels to generate energy for the propulsion of its ships. And now the shipping company has announced that it intends to convert the propulsion system of its 15,000 TEU container vessel MV SAJIR to use natural gas (methane), a world-first.

The conversion of the main engine to natural gas operation will be carried out by MAN Energy Solutions based on a contract recently signed with the company.

The pilot project, which is unique to date, provides for the conversion of an existing MAN B&W 9S90ME-C engine, which was previously operated with heavy fuel oil, to a MAN 9S90ME-GI dual fuel engine with gas injection.

"With the conversion of SAJIR, we are the first shipping company worldwide to convert a container vessel of this size to natural gas propulsion," said Richard von Berlepsch, Managing Director Fleet Management at Hapag-Lloyd. "It is a unique pilot project from which we hope to learn for the future and pave the way for the conversion of large ships to this alternative fuel.”

SAJIR is one of 17 “LNG-ready” vessels in Hapag-Lloyd's fleet already designed during the newbuilding phase. With the conversion of the SAJIR, Hapag-Lloyd is implementing a technical option for reducing the exhaust emissions of large ships. The company is thus reacting to the tightened sulfur limits in fuel which will come into force next year and lead to considerable additional costs for all shipping companies.

The shipping company thus sees good opportunities to convert part of its fleet for the use of natural gas. There is talk of a further 16 container ships that have already been built "LNG-ready." With conversion costs of around 25 to 30 million dollars per ship, this would result in a total investment of around 400 million dollars. 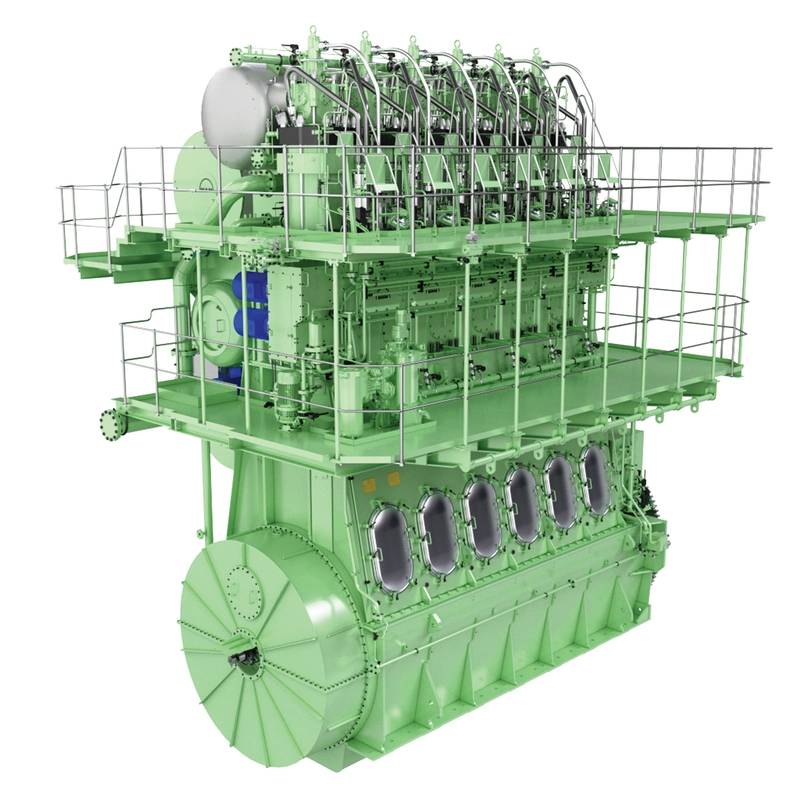 The MAN B&W engine type ME-CI. ©MAN ESThe new propulsion systemThe 368 x 51 m SAJIR, which was put into service in 2014 and comes from the fleet of the Arab shipping company UASC (United Arab Shipping Company), still has a slot capacity of 14,993 TEU. The ship is currently powered by a MAN 9S90 ME-C 10.2 engine with an output of 37,630 kW at 72 rpm. This engine is to be converted into a 9S90 ME-C 10.5-GI dual-fuel engine with the same power and speed.
MAN SE has already been able to present several engine conversions from its portfolio (see MV WES AMELIE and others) as a reference, but the Hapag-Lloyd project is nevertheless the first ship-side retrofit project for the Augsburg engine manufacturer.

The conversion of a ship to methane operation is highly complex. Even though the nine-cylinder in-line diesel engine of the SAJIR to be converted is the "progenitor" of the DF engine 9S90 ME-GI, the two variants differ in essential components and systems. For example, the cylinder head of the ME-GI engine is equipped with two valves for gas injection and two conventional valves for the pilot fuel oil. The two engine types, ME-C and ME-GI, are largely the same and have the same efficiency, the same power and the same main dimensions. In comparison to the ME-C engine, the ME-GI engine has a modified exhaust system, a modified cylinder head with the necessary gas supply lines and attached gas control devices.

On the gas supply side, space must be found for the LNG tank and vaporization equipment in the ship without losing too much container capacity. As Hapag-Lloyd reports, with the additional gas storage system certified by DNV-GL, around 350 container sites will theoretically be lost in the space provided during the construction of the ship.

The engine technology
The vessel normally serves the Far East route from Asia to Northern Europe through the Suez Canal. The LNG tank capacity will be 6,500 cu. m. A membrane tank (GTT design) will be installed at the designated location in one of the holds, just in front of the engine room. Membrane tanks allow an optimal adaptation to the existing ship shape. From today's point of view, the range with one LNG tank filling cannot yet be specified precisely. According to statements, the SAJIR will re-bunker LNG twice - the locations will depend on the availability of the fuel and the price.

The ME-GI (Gas Injection) engine has already established a new industry standard for two-stroke propulsion engines with well over 200 machines ordered and delivered and is used on LNG carriers, container ships and bulk carriers. According to the company, the two-stroke technology also solves the problem of the unwanted methane slip. The engine combines the ad-vantages of multi-component combustion with the reliability of the established ME engine. 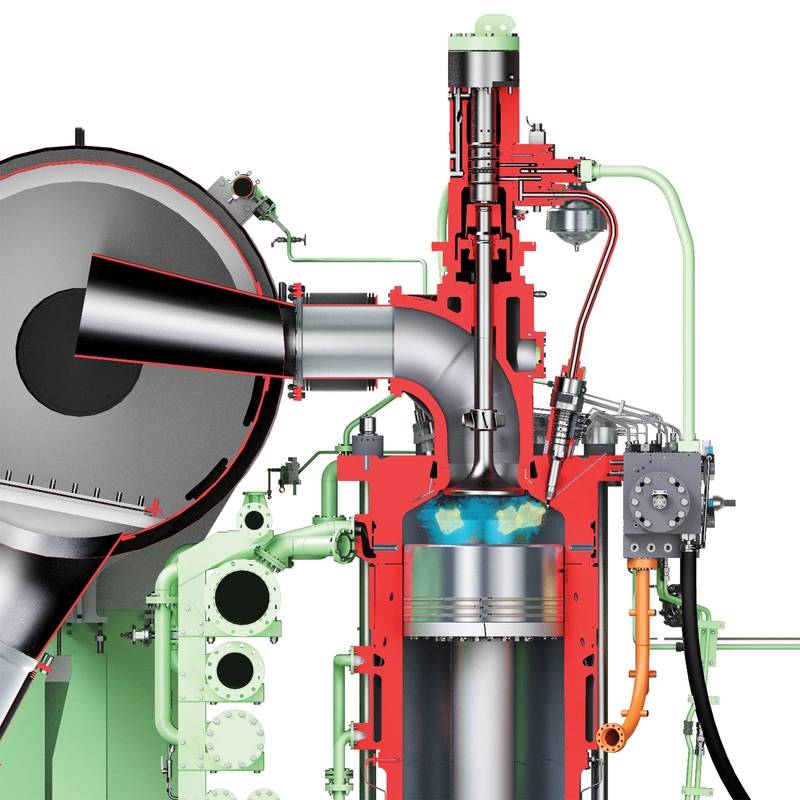 MAN Energy Solutions supplies the necessary engineering as well as all necessary engine and selected system components for the conversion in order to adapt the engine, which is currently still suitable for heavy fuel oil, for operation with liquid and gaseous fuels.

"We offer a fully integrated complete solution. In addition to the conversion of the engine, this also includes the entire gas treatment system for supplying gas to the main engine, including the pilot oil module, and the auxiliary engines from MAN Cryo and a 300 bar high-pressure pump vaporator unit (VPU system) from MAN SE," said Wayne Jones, Chief Sales Officer MAN SE.

The ME-GI PVU is designed to pressurize and vaporize the LNG fuel to the exact pressure and temperature required by ME-GI engines. Gas pressure is controlled via control of hydraulic oil flow to the pump, ensuring a very quick and precise control of the LNG supply to the engine. Separate control of each pump head provides full redundancy.

Operation with low-sulfur fuel (LSFO) is also possible as back-up.

On the engine side, as far as possible all components of the combustion chamber and their attachments are replaced. In addition, the injection components for gas injection are re-placed or added. In particular, the pilot oil system required for gas operation will be completely rebuilt. The control of the ME-GI engine is more complex than the original control of the heavy fuel oil engine. This requires a conversion of the engine sensors or a new instrumentation.