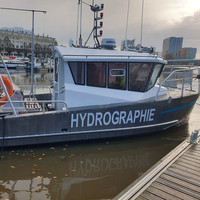 French builder Alumarine Shipyard has delivered a new hydrographic survey boat to the Port of La Rochelle.The eight-meter aluminum vessel, dubbed Cassiopée, is powered by a dual electric/diesel propulsion system. The newbuild is designed to transit at 20-25 knots under diesel power between the home port and the acquisition area, then shift to the electric outboards while performing scans of the seafloor.Electric propulsion and hybrid drives manufacturer Torqeedo said it worked closely with the naval architect and shipyard to specify…

Vacon, One of 18 Selected by DoE

Global AC drives manufacturer, Vacon, has been named one of 18 industry-leading companies to participate in the Next Generation Power Electronics Institute at North Carolina State University. The Institute will bring research and commercial product development resources together in a centralized location to improve and make cost-competitive wide-bandgap (WBG) semiconductor-based power electronics. Over the next five years the institute will be financed with $70M in Department of Energy (DoE) support plus a collective $70M contribution from participating companies and other partners.

Frost & Sullivan announced global AC drives manufacturer Vacon as the recipient of the European Low Voltage (LV) Alternating Current (AC) Electric Drives Product Line Strategy Award for 2012. The accolade recognizes Vacon's achievements in effectively optimizing strategies, processes and performance. "Vacon is one of the leading manufacturers of LV AC electric drives in Europe. The company's expertise has enabled it to produce and market a range of drives which accommodates diverse end-user applications. Vacon has consistently developed products with improved safety features, reliability, efficiency and value-added benefits. VACON 100, VACON 100 X and VACON 20 X have all witnessed wide acceptance from the broad customer base in the European industry.

AC drives manufacturer Vacon will deliver 81 AC drives for 3 new fishing trawlers being built for Aker Seafoods. The new fishing vessels will be built at the STX shipyard in Braila, Romania. They will be further outfitted and commissioned at STX Brattvaag, Norway. The design of the new 70-metre-long STX FV01 trawlers will replace that of the older vessels, improving fuel efficiency and capacity for Aker Seafoods. The efficient operation of the trawls and equipment relies on 27 advanced winch systems controlled by Vacon's AC drives. The winch control systems are based on Vacon's new modular engineered common DC bus technology. The first delivery of AC drives for the trawlers took place in June 2012.

Global AC drives manufacturer Vacon has signed a three-year supply agreement with Virginia-based Bristol Compressors International Inc. The supply agreement covers design and manufacture of AC drives that will be used to control Bristol Compressors' Benchmark VStar variable speed compressors. "This partnership with Bristol Compressors allows Vacon to strengthen its foothold in North America in the high-volume residential HVAC marketplace which is an exciting growth opportunity for Vacon," says Tom Doring, President, Vacon North America. "This new compressor represents a major technical leap forward in efficiency and sound reduction, and we are excited to be part of the overall solution".

The global AC drives manufacturer Vacon inaugurated their new factory in Suzhou on 11 May 2011. Present at the inauguration ceremony were Consul General of Finland in Shanghai Mr Matti Heimonen, Vice Chairman of Suzhou Industrial Park Administrative Committee Ms Sun Yanyan, members of Vacon's Board of Directors and management team, and Vacon partners from the Asia-Pacific region. Built to meet the company's growth targets, the new factory occupies a total area of 24,000 square meters. The new plant also has a R&D lab and the after-sales service center for the Asia-Pacific region. At the ceremony, Mr Jan Inborr, Chairman of Vacon's Board of Directors, and Mr Pertti Rajamäki, Managing Director of Vacon's subsidiary in China, outlined Vacon's future prospects.

The AC drives manufacturer Vacon has inaugurated its office in São Paulo, Brazil to support its customers in Brazil and South America. With growing energy consumption, Brazil and South America in general are lucrative markets for energy-saving Vacon AC drives. Brazil is one of the world's major producers of sugar and ethanol, and it is estimated that 60 new sugar cane plants will be running by 2010. Brazil is the 10th largest energy consumer in the world and the largest in South America. Vacon variable speed AC drives bring considerable energy savings and improve process control. These two major benefits provide a huge market potential in South American countries, where the energy infrastructure is being built up and blackouts are frequent.

The Finland-based AC drives manufacturer Vacon strengthens its global presence by opening a subsidiary in Australia. The grand opening will take place on March 15 in Melbourne, and the inaugural speech will be given by Mr Glen Lindholm, Finland's Ambassador to Australia. With the head office in Melbourne, and sales offices in Perth and Brisbane, Vacon Pacific will concentrate on serving the growing markets of Australia and the Pacific region. "By opening a subsidiary in Australia to cover the Pacific region, Vacon now has offices in 18 countries outside Finland. This is yet another important step supporting Vacon's strategy of a global presence and being closer to our customers.

The Finland-based AC drives manufacturer Vacon strengthens its global presence by opening a subsidiary in Chennai on the southeast coast of India. The grand office opening will be celebrated on January 24, 2007 with invitees representing the company, customers and cooperation partners. With a subsidiary in one of India's largest commercial and industrial centers, Vacon will further improve its service in the growing markets of the Asia-Pacific region. Vacon operates on its own or through partners in 100 countries. Taking more foothold in India follows closely Vacon's strategy of increasing its global presence. Despite its large annual energy production, India is a net energy importer. Overall, India's need for power is growing at a prodigious rate.

The Finland-based AC drives manufacturer Vacon has signed a distributor agreement with Ruselprom, one of the biggest motor manufacturing companies in Russia. Vacon will supply drives to Ruselprom in the power range from 200 kW up to 2 MW. With its extremely rapid market growth and rising energy price, Russia is a very interesting and important area for Vacon. Market growth in Russia is even faster than in China. The high energy price encourages investments in AC drives, which bring considerable energy savings. Ruselprom supplies motors to a wide scope of industries ranging from oil and gas to chemical and petrochemical industry, machine building, metallurgy and construction. In accordance with the agreement, Ruselprom will sell and market Vacon AC drives through its own channels.

The AC drives manufacturer Vacon has developed an ATEX-certified thermistor input which is fully integrated in the drive. Certified and compliant with ATEX 94/9/EC, the integrated thermistor input is specially designed for the temperature supervision of motors that are placed in potentially hazardous areas. In contrast to a typical system with a separate thermistor relay and contactor, a thermistor input is designed to be fully integrated in the Vacon NXP drive, simplifying the use of drives together with Ex motors, i.e. motors that are designed and certified for use in potentially explosive environments. If extreme temperature is detected, the drive stops feeding energy to the motor and thus further heating of the motor is avoided.