When the Bell Rings: Honoring US Merchant Mariners 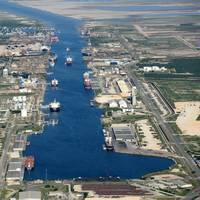 This Memorial Day, as we rightfully honor the military men and women who gave their lives winning and protecting our freedoms, let us not forget an often-overlooked remembrance for the thousands of U.S. merchant mariners who also died serving our country in their own selfless ways.In 1933, by a joint Resolution of Congress and by Proclamation of the President of the United States, May 22 was set aside as National Maritime Day to honor the sacrifices of U.S. merchant mariners during wartime and in peace. 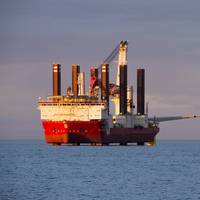 Imagine waking up one morning with a deadly tiger snake in your bed. To make matters worse out of the window you notice an approaching bushfire.Both are a threat to your life, but you are going to deal with the imminent danger of the snake first, and then tackle the more distant but still serious fire. It's the same with the new coronavirus and climate change.Since the rapid spread of the coronavirus beyond its origin in China and the social and economic havoc it's wreaking across the globe…

The EU Commission’s big goals for offshore wind – between 230 and 450 GW by 2050 – are achievable provided the right investments in electricity grids and Governments take the right approach to maritime spatial planning, said a report.According to the WindEurope report examines where 450 GW of offshore wind could be deployed most cost-effectively around Europe, bearing in mind there is only 20 GW today. 450 GW of offshore wind is part of a European Commission scenario to deliver… 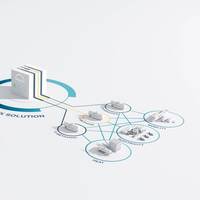 MAN Energy Solutions is acquiring 40 percent of the shares of the electrolysis technology company H-TEC SYSTEMS. A contract confirming the partial acquisition was signed in Augsburg by Dr. Uwe Lauber, CEO of MAN Energy Solutions, and Ove Petersen and Heinrich Gärtner, executive managers of the GP JOULE Group. The contract also makes provisions for a majority or complete takeover of H-TEC SYSTEMS at a later date. The company will continue to be independently represented on the market with no change in the level of commitment to its customers.

Turkey's Karadeniz will in the next two weeks begin supplying Zambia with electricity from a power-generating ship as it looks to take advantage of chronic shortages in Africa, the company said on Wednesday. Karadeniz builds what are effectively floating power stations which plug into electricity grids after berthing. They run on fuel oil but can also use natural gas. One of the firm's vessels docked this week at Mozambique's Nacala port, from where it will supply 100 megawatts of electricity for the next two years, power that will then be exported through the grid to neighbouring Zambia. This is the second power ship Karadeniz has deployed to Africa after a 225 MW unit arrived in Ghana last year. 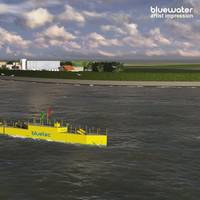 The first BlueTEC Tidal Energy platform was formally named by the Mayor of Texel, the Netherlands this morning. The floating platform, which holds tidal turbines below the sea surface, will soon be positioned near the island of Texel – supplying clean electricity to the Dutch grid. This first BlueTEC will serve as a demonstration platform targeted at remote locations worldwide, such as islands in Indonesia, Philippines and the Pacific. It is also the start of further development of higher capacity tidal energy platforms, to be deployed in large farms.

The Australian Renewable Energy Agency (ARENA) today announced $101.7 million of support for Moree Solar Farm, which upon completion will be one of the largest solar plants in Australia. ARENA CEO Ivor Frischknecht congratulated renewable energy company Fotowatio Renewable Ventures (FRV) who are set to begin construction on the project shortly. “Moree Solar Farm will be the first large-scale solar plant in Australia to use a single-axis horizontal tracking system, where panels follow the sun across the sky to capture sunlight and maximise power output,” Mr Frischknecht said. Mr Frischknecht said the Moree community would benefit from the project and had been keen supporters, along with the Moree Plains Shire Council, for several years.

France Picks: GE is the One for Alstom

France chose General Electric to form an alliance with Alstom on Friday - rejecting an offer from Siemens and Mitsubishi Heavy Industries - but said the deal still needed some work and added it would buy a 20 percent stake in the hotly-contested company. Economy Minister Arnaud Montebourg said he had used a newly- created state decree to reject both of the existing offers as not being in France's strategic interest, and had formulated fresh demands to GE Chief Executive Jeff Immelt. The decision ended weeks of suspense surrounding one of Europe's fiercest industrial battles in years, but left open major questions about the final shape of an alliance which GE hopes will give it access to new power markets.

UK-based Red7Marine Offshore Ltd announces the award of a number of new contracts for 2013. Cable protection work has recently been awarded on the Paimpol-Brehat Tidal Energy Converter project, Brittany, France. The scope of work includes the installation of more than 100 concrete mattresses to provide additional stabilisation of the export cable connecting tidal energy devices to the shore. The scope includes a number of supporting operations with site work due to commence summer 2013. The company’s subsea cable installation expertise also continues to expand with the recent award of the export cable installation for the Biscay Marine Energy Platform project near Bilbao, Spain. 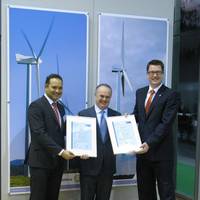 Brussels/Belgium, Hamburg/Germany, 14 March 2011 - Gamesa received a Type Certificate from GL Renewables Certification (GL) for their wind turbine G52-850 kW Class I, for both grid frequencies, 50 and 60 Hz. The Type Certificate confirms that the wind turbine G52-850 kW Class I complies with the requirements of the GL Guideline for the Certification of Wind Turbines, Edition 2003 with Supplement 2004 regarding design, power quality and verification of the load assumptions for both grid frequencies.