BOATBUILDING: From Estonia with Love 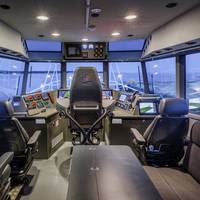 Hamburger Hafen und Logistik AG, HHLA, the company that operates three out of four of Hamburg’s container terminals, continued its positive performance in the first nine months of 2019.The total revenue was 1.04 billion euros, an increase of 8.3 percent, said the German logistics and transportation company.The operating result (EBIT) improved strongly by € 19.3 million, or 12.4 percent, to € 175.4 million. The positive effects of the initial application of IFRS 16 in the EBIT amounted to approximately € 10.6 million.

Deltamarin, which provides ship design, offshore engineering and construction support for the marine and offshore industries worldwide, is strengthening its position as a trusted designer of ro-pax vessels with the latest contract signed with Rauma Marine Constructions (RMC).The contract covers basic and detail design services for Tallink’s new LNG-powered shuttle ferry set to operate between Helsinki in Finland and Tallinn in Estonia.Deltamarin’s commission covers basic and detail design services for the hull, machinery and electrical systems.

Estonia's energy group Eesti Energia is all set to import gas from Russia's largest private gas company Novatek via Lithuania's LNG terminal based in Klaipeda, which is operated by KN,  in September.The contract with the new Klaipeda LNG terminal user was signed on Thursday. It is planned that the first cargo of  Eesti Energia in the history of Klaipėda LNG Terminal will arrive in Klaipėda at the end of September. “The contract signed with Eesti Energia confirms that the conditions for using our reliable terminal satisfy the users of the terminal and natural gas users in Lithuania and abroad. CADMATIC has acquired Finnish software company Kymdata Ltd. including the entire share capital as well as IPRs to all Kymdata’s CADS software and its business agreements. The acquisition increases CADMATIC’s estimated turnover to EUR 28 million. With the addition of Kymdata’s 43 employees, CADMATIC will employ over 200 people.Kymdata's CADS Electric software is a leader in electrical and automation design in Finland and Estonia. The CADS product family also includes software modules e.g. for HVAC calculation and modeling as well as structural design.

Ferry in Estonia Upgraded to Battery-Hybrid 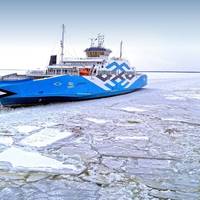 Norwegian Electric Systems has signed a contract with the Estonian shipbuilder Baltic Workboats to deliver upgrade of the Diesel Electric Propulsion system onboard the ferry Tõll to battery-hybrid.The ferry operator TS Laevad, a subsidiary of the listed port Company Tallinna Sadam, operates the ferry routes between Western Estonia’s major islands and mainland. The upgraded hybrid-ferry, serving the Virtsu-Kuivastu route, is expected to reduce the consumption of diesel fuel by one fifth as a result of the hybridization project.

German logistics and transportation company Hamburger Hafen und Logistik AG (HHLA) said that it has closed the first half of 2019 with rising revenue and results, despite a challenging market environment.Container throughput increased moderately, due in particular to the successful integration of the Estonian terminal operator HHLA TK Estonia, which was acquired last year. A significant rise in container transport was achieved, said a press release.In conjunction with a strong increase in revenue in the Logistics segment and a once again moderate increase in revenue from property management… 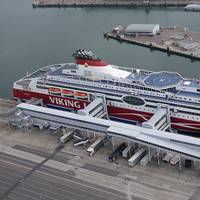 Trelleborg’s marine and infrastructure operation has been awarded a contract to install its rope-free automated mooring system, AutoMoor, at the Old City Harbor at the Port of Tallinn, which is the biggest harbor in Estonia and one of the busiest passenger harbors in the world.In first quarter of 2020, Trelleborg will install six units of its AutoMoor T40 Twin Arm at the Old City Harbor’s Berth 13 cruise ferry wharf to facilitate faster berthing processes and improve safety levels within the port environment.

Estonian shipping company Tallink Grupp has  launched an international name search for its new shuttle vessel, the construction of which is due to kick off at the Rauma shipyard in Finland early next year (2020).According to the largest passenger and cargo shipping company in the Baltic Sea region, the shuttle vessel, which will be similar to the group’s newest vessel Megastar, operating on the Tallinn-Helsinki route since January 2017, will be completed by the end of 2021 and delivered to Tallink Grupp in January 2022.The new vessel will then start operating on the Tallinn-Helsinki route… 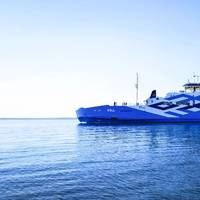 Estonian ferry company TS Laevad has signed an agreement with the Estonian shipbuilding company Baltic Workboats AS to rebuild the ferry Tõll, which operates the on the Virtsu-Kuivastu line, into environmentally friendly hybrid ship.The subsidiary of Tallinna Sadam said in a press release that during the reconstruction, a battery bank will be installed on the vessel to reduce the consumption of diesel fuel and reduce the resulting exhaust gas by replacing fossil fuel with electricity stored in battery banks.According to Jaak Kaabel… 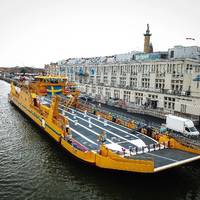 Sweden’s largest hybrid-electric car ferry, Tellus, will soon begin passenger operations.The ferry will service Sweden's busiest maritime routes, along with more than 100,000 vehicles transported per month, the majority being heavy trucks.The 100-metre Tellus ferry can carry 80 cars and 297 passengers per tour and will operate with a battery capacity of 949 kWh mainly in fully electric mode.Danfoss Editron supplied the electric drive system. The Tellus ferry will “mainly operate on fully-electric mode”…

The Estonian terminal operator HHLA TK Estonia is strengthening its position as a RoRo hub in the Baltic region.The wholly owned subsidiary of Hamburger Hafen und Logistik AG (HHLA) said in a press release that the Finnish ferry company Eckerö Line recently began connecting the port of Muuga, where HHLA TK Estonia operates a multi-function terminal, with Vuosaari in Finland. Twice daily, the RoPax ferry Finbo Cargo enters the port of Muuga, which is about 20 kilometres east of the Estonian capital, Tallinn. 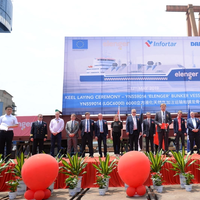 After the steel-cutting ceremony in March the keel-laying ceremony has taken place at Damen Yichang Shipyard in China for the LNG Bunker vessel for the new energy brand ELENGER, formerly known as Eesti Gaas. The event was attended by Mr. Ain Hanschmidt, Chairman of the Advisory Board of Elenger and CEO of its parent company Infortar, together with a group of senior colleagues from both companies. Representatives from Damen Shipyards Gorinchem, Damen Yichang Shipyard and Bureau…

Ten years after the adoption of International Maritime Organization (IMO)’s Hong Kong Convention for the Safe and Environmentally Sound Recycling of Ships, in May 2009, there has been progress with voluntary application of its requirements, but the treaty needs to enter into force for it to be widely implemented.“I urge Member States who have not yet done so to ratify the Convention at the earliest opportunity, in order to bring it into force as soon as possible,” said IMO Secretary-General Kitack Lim…

German terminal operator Hamburger Hafen und Logistik AG (HHLA) revenue increases by 10.3 % in the first quarter of 2019, despite a challenging market environment, said the company.Container throughput increased slightly, partly due to the successful integration of the Estonian terminal operator HHLA TK Estonia last year. Extremely positive performance in container transport and property management led to a revenue of € 347.6 million (+ 10.3 %).The operating result (EBIT) was far above the level of last year, increasing by € 11.8 million or 24.5 % to € 59.7 million.

A Finnish company said on Thursday it planned to develop a railway connection between north Finland and Norway's Kirkenes port to link with potential Arctic shipping routes at an estimated cost of between 3-5 billion euros ($3.4-5.6 billion).Global warming has reduced ice coverage in the Arctic, opening up the possibility of new and shorter shipping lanes between north Europe and Asia, though control of routes is disputed.Finland's Finest Bay Area Development said it had signed a memorandum of understanding with Norway's Sør-Varanger Utvikling to investigate how to build a railway and its impact on the environment, society and the economy."An Arctic railway would connect Finland to the Northeast Passage," Kustaa Valtonen, a director at Finest Bay Area Development, said in a statement. 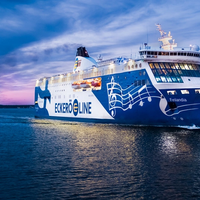 ABB Ability Marine Pilot Visionis designed to allow MS Finlandia to enhance safety during maneuvering and dockingABB and Eckerö Line teams will install ABB Ability Marine Pilot Vision on board cruise ferry MS Finlandia with no interruption to the ship’s schedule. In addition to the mechanical interface, ABB Marine & Ports Digital Service teams will support the crew to maximize the value from the system and integrate the additional tool with their current bridge team operations.ABB…

The Estonian government has refused to start the permitting process for the building of a $1.9 billion, 600-MW offshore wind farm off the west coast of the island of Saaremaa, citing national security concerns.The Estonian developer Saare Wind Energy OU had been drawing up plans for four years and had applied for a 50-year building permit for 100 six-megawatt turbines off the island of Saaremaa, said a report in Bloomberg.The wind farm was to consist of 100 turbines of 6 MW each 10 to 27 kilometers off the western coast of the island. 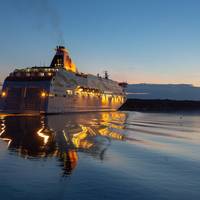 Tallink Grupp, the largest passenger and cargo shipping company in the Baltic Sea region, and Finnish shipbuilding company Rauma Marine Constructions (RMC) signed the contract for the construction of a new LNG-powered fast ferry for the Tallinn – Helsinki route shuttle operations.Similarl to the group’s newest vessel Megastar, the new shuttle ferry will also be dual fuel operated, its overall length will be approximately 212 meters and with a passenger capacity of 2,800, said… 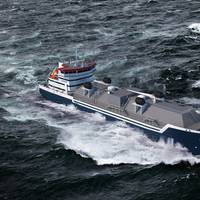 Steel cut for first short-sea LNG bunker vessel for Eesti Gaas at Damen Yichang Shipyard, China.On March 18, 2019, a ceremony was held at Damen Yichang Shipyard, China, to mark the start of cutting steel for the first of a planned series of short-sea LNG Bunker vessels to be built for Eesti Gaas of Estonia. The 6,000m³ capacity vessel and its future sister-ships are intended to accelerate the wider adoption of LNG as a cleaner alternative fuel in the north-eastern region of the Baltic Sea by providing a mobile and efficient ship-to-ship distribution service for the first time.Virgo Vinkel…