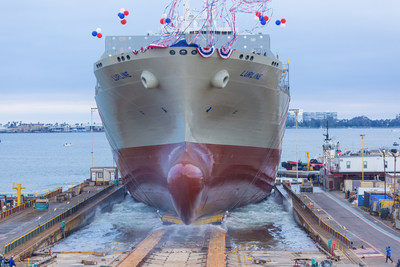 Matson, Inc. and christened the largest combination ConRo ship ever built in the U.S. -- Lurline -- in a ceremony at the General Dynamics NASSCO shipyard in San Diego, CA on Saturday, June 15.

Lurline an iconic name in Matson's long history, dating to the construction of Captain William Matson's first ship of that name in 1887. Four more ships were given the name in subsequent years; this vessel will be the sixth.

The new Lurline is the first of two new ships being built for Matson by NASSCO at a total cost of approximately $500 million for the pair, and the third of four new vessels that Matson will put into service during 2018, 2019 and 2020.  Named in honor of the ocean deity revered in the native Hawaiian culture, Matson's two Kanaloa Class vessels under construction at the NASSCO shipyard are being built on a 3,500 TEU vessel platform.

Measuring 870 x 114 ft. with a 38 ft. draft, the 50,000 metric ton Lurline will be Matson's largest ship, as well as one of its fastest ships with a top speed of 23 knots.  Both new Kanaloa Class vessels will have an enclosed garage with room for approximately 500 vehicles plus ample space for rolling stock and breakbulk cargo. Top features includes a fuel efficient hull design, environmentally safe double hull fuel tanks, fresh water ballast systems and the first Tier 3 dual fuel engines to be deployed in containerships serving West Coast ports.

Matson is expected to take delivery of the vessel in late October, 2019.