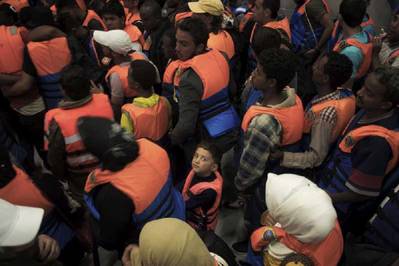 A young boy surrounded by adults after being rescued in June 2014 from a boat on the Mediterranean Sea. Photo: UNHCR/A. D’Amato

The Wall Street Journal ran a story yesterday describing how the increasing number of seaborne migrants making the journey from Africa to Europe has not only proved to be too much for European coast guards and navies, it now poses a major problem for Mediterranean shipping.

Maritime law states that all vessels, including private vessels and huge container ships, must come to the aid of any boat in distress. This poses a problem for mercantile vessels passing between southern Italy and Africa, which is both a bottleneck through which one third of all Mediterranean shipping traffic passes, and the shortest place for migrants to make the perilous ocean journey.

"Last year, Italian authorities called on 700 mercantile vessels to help rescue about 40,000 migrants. One ship supplying the oil platforms off the Libyan coast participated in 62 operations," the article said. "Many of the ships are Italian, but Greek vessels, as well as ships of other nationalities, are also involved in rescues of migrants trying to reach the Greek coast."

Not only is the flow of migrants causing ships to veer hundreds of miles off course, and delaying routes by up to a week (which can add $500,000 to the cost of a journey), but ships and crews are often asked to perform rescue operations and provide medical care, something they are not equipped to do.

"Rescue operations have placed a heavy burden on private vessels, which typically have crews of fewer than 20 and lack the training, medical support and life jackets to help several hundred migrants at a time. Crews often ransack their own food and clothing supplies to help the migrants once they get on board," wrote the story's authors, Liam Moloney and Costas Paris.

"The ships—which must, according to maritime law, come to the aid of a boat in distress—have also been drawn into dangerous situations. In February, the Italian coast guard ordered one ship to act as a barrier to help pull scores of migrants from an inflatable dinghy in gale-force winds. Coast guard officials from the command center in Rome often have to guide crews on very large vessels to assist flimsy boats and dozens of migrants who often don’t know how to swim."

Shipping companies have pressured European governments for massive sea patrols, but have found little in the way of response. Just last fall, the UK withdrew its support for future search and rescue operations, saying that such actions only encourage more migrants to make the journey.

“We have become part of a rent-a-vessel program because countries can’t get their act together,” Luca Sisto, a senior official at the Italian shipping lobby Confitarma, told the Journal.