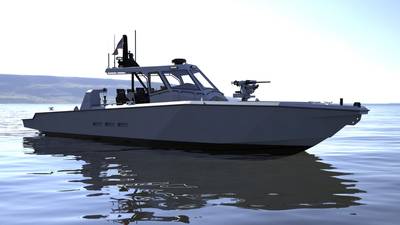 In any business, companies that achieve success must do at least one thing extraordinarily well. Shipbuilders like Metal Shark Boats are among companies that have taken their success to the next level by do a lot of things well. Government and commercial. Aluminum, steel and fiberglass. Serial and custom. Newbuild and repair. Sixteen to 300-plus feet. Patrol boats, pilot boats, fireboats, passenger ferries. Domestic and international. Metal Shark has thrived across the board.

A driving force is the problem-solving spirit and no-challenge-too-great mentality of Metal Shark CEO and co-owner Chris Allard. A naval architect and graduate of the Webb Institute, Allard brings to the business an engineering-centric approach that has fueled Metal Shark’s growth, driving innovation and transforming the company from a small, regional builder to a globally recognized industry leader.

“When we first started, we were focused solely on trailerable boats, because that’s what we understood best, and also, frankly, because we were limited in terms of vessel size because our first facility wasn’t on the water. We were really only focused on the idea of serialized high-rate production, and not critical-path, long process builds,” Allard said. “It has been a process of evolution to apply the positives of what we learned in smaller boats to larger and more complex builds. Goals evolve.”

Metal Shark has grown to capture hundreds of millions in government and military contracts while expanding into the commercial sector and becoming one of America’s largest suppliers of high-speed ferries. Now with three facilities and Louisiana and Alabama, Metal Shark builds  vessels in aluminum, steel and fiberglass, with the capability to construct vessels up to 300 feet long. 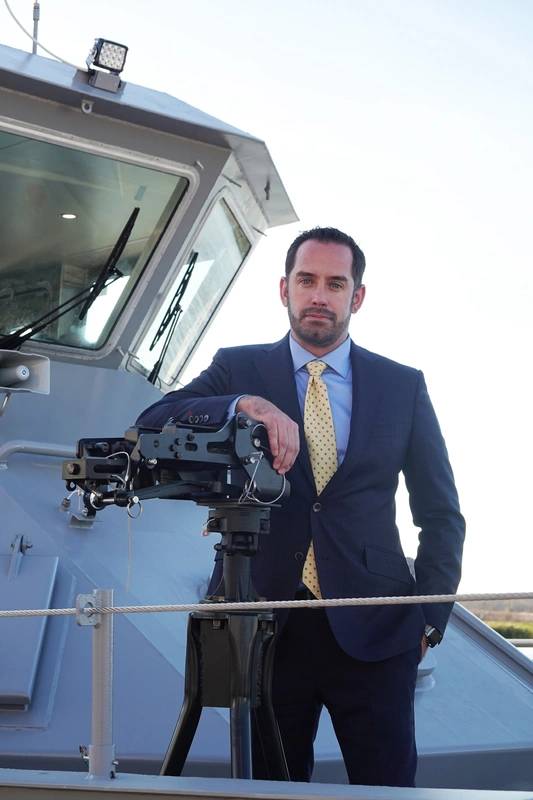 “Part of the unique challenge of being CEO is the importance of being willing to change your own mind. I find it fascinating how our elected leaders are criticized for ‘flip-flopping’ when they change positions. I think the willingness of a leader to change their mind, to analyze new data, to get smarter, to learn and to assess self-performance in real time is critical. We absolutely must get smarter every single day, and in doing so, we must not be so attached to our previous decisions that we are unwilling to make new ones. This can be very hard, as it often requires acknowledging you were wrong, which is something that never feels good, but it is essential to leadership.” - Chris Allard. CEO, Metal Shark (Photo: Metal Shark)

No job too big
Having already established itself among major players in the government and military boatbuilding space, in 2016, Metal Shark was one of two builders originally selected to build the new NYC Ferry fleet, operated by Hornblower (the other builder, Horizon Shipbuilding in Bayou la Batre, Ala., was acquired by Metal Shark in 2018.) Metal Shark delivered all six of its ferries on or ahead of schedule between April and June 2017, and through subsequent orders, it went on to deliver 22 ferries in total. The series’ final ferry, Time Traveler, handed over in December 2020, wrapped up a newbuild scope with a vessel quantity and delivery pace many thought unobtainable. “It proved to the industry and clients that things that might not have been thought to be possible, are,” Allard said.

“A key to the success of that project was the standard product. There were really two flavors of the vessel. Instead of building 20 different things, we were able to create a serialized batch, a run of boats that significantly reduced cost and time, and then in turn ramped up the ability to implement the service for the city. If anything, I think it’s eye-opening for the industry, showing the things that can be done.” 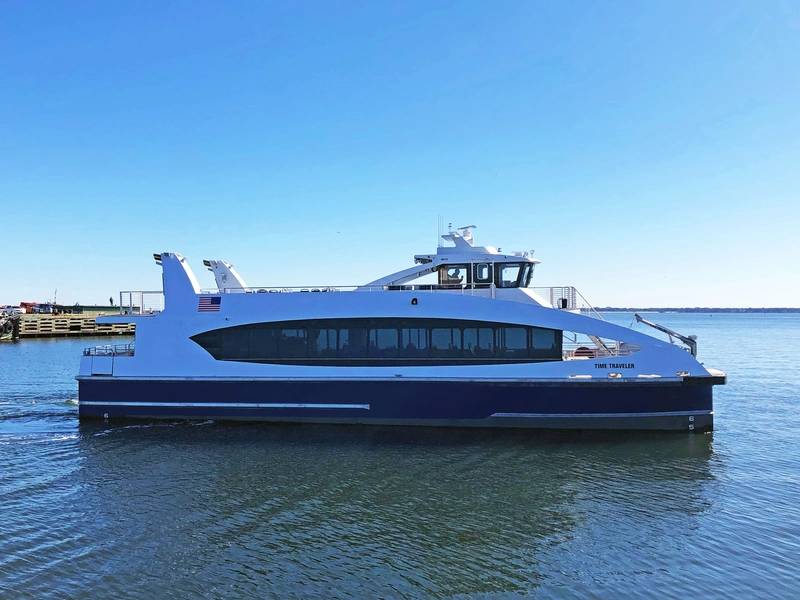 Delivered in December 2020, Time Traveler was the last in a large build program for NYC Ferry (Photo: Metal Shark)

Allard said there’s ample opportunity to apply the same approach in other parts of the industry, including large programs for government and military customers in the U.S. and overseas. “Given the unstable situation and security concerns in many parts of the world, and depending on geopolitical events in the next few years, we may see the need to do something that big and that quick in the military space.”

If needed, Metal Shark is prepared to fill orders on short notice. Several years ago, it introduced its stock boat program, keeping an inventory of both completed and partially finished versions of its most popular models. “That is something that we continue to believe in, and we’re pushing hard to reduce lead times and increase stocking efforts,” Allard said. “And not just the small boats.”

“We believe that the maritime market is somewhat behind in only offering clients build-to-suit options, and we want to be able to give our clients solutions that are as close as pre-constructed, buy-off-the-lot as possible. No design time, no lead time, no payment terms. Here’s the boat, here’s the bill, put it in service and do the job. And I think the marine market is ripe, and needs to be led that way so that people that have a job to do, whether it’s law enforcement or commercial, can go and buy the asset they need in days, weeks or months, not months, years or decades.” 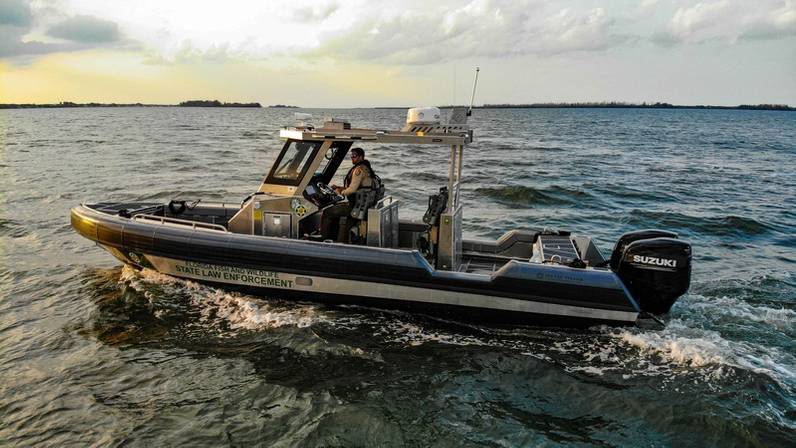 The leading edge
While the number of vessels Metal Shark is able to produce is impressive, the product is too, and growing more so as technologies and capabilities continue to evolve. Allard said that despite challenges brought on by the COVID-19 pandemic Metal Shark delivered about the same number of vessels in 2020 as it did the year prior, but with a marked increase in value—a trend that is expected to continue. “The average size and cost of our deliveries continues to trend higher as the boats grow in size and complexity,” he said.

“It’s the natural evolution of our company. Our technological capabilities and ability to deal with complex problems, and in turn projects, have grown. We’ve been able to participate and be successful in higher dollar projects that are more complicated.”

This evolution, combined with the quality of the product, is also helping to drive Metal Shark’s strong sales numbers abroad, Allard said. “It can be challenging to compete overseas, especially on price. Once you get overseas, there’s no Jones Act. You’ve got potential competitors that are in lower-cost portions of the world, and dozens of different countries that are capable of building boats,” he added. “What has made us successful overseas is our technology and our innovation. We’re building a product that is a step above, and it’s not easy to find comparables around the world. There aren’t 70-knot interceptors anywhere else. So, we find our success is around countries that are looking for the highest quality product or the next generation product. The next step in maritime patrol technology, and boats that otherwise that isn’t really available in the world scene.” 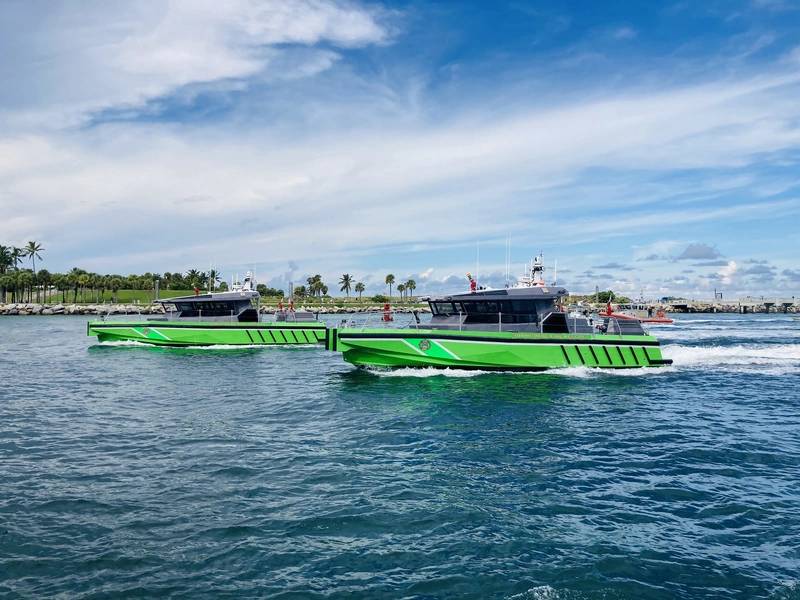 “I am particularly proud of our growing success in the fireboat market, as we build higher quantities of larger and more complex vessels than ever before,” Allard said. “These are challenging, technical, complex builds and our team has grown quite adept at tackling the challenges of each new build head-on.” (Photo: Metal Shark)

Allard and Metal Shark have managed to stay on the leading edge of new boatbuilding developments. “This requires investment in technology, not only in the boats, but in the build process. Whether that’s automation in the build process, or autonomy in the operation of the boats. I think that the incorporation of technology into the company, transcending just the boat is something that’s really set us apart.”

Autonomous vessels are quickly gaining acceptance across the maritime sector, but especially in government and military applications where the technological and safety advantages are most pronounced. In January, Metal Shark was selected by the U.S. Marine Corps to develop and implement the Long Range Unmanned Surface Vessel (LRUSV) System, continuing a long string of high-tech projects for the company’s Sharktech autonomous vessels subsidiary launched in 2018. According to Allard, Metal Shark has designed, built and delivered more than 400 autonomous and remotely operated vessels to date, including boats for the U.S. Navy and U.S. Coast Guard.

“I am captivated by how the evolution of this technology will completely change the maritime sector. I think the impact on the maritime world will be seismic in scale, Allard said. “I am thrilled by the small role we’ve been able to play in the journey so far, and I am really excited about new projects in that space.” 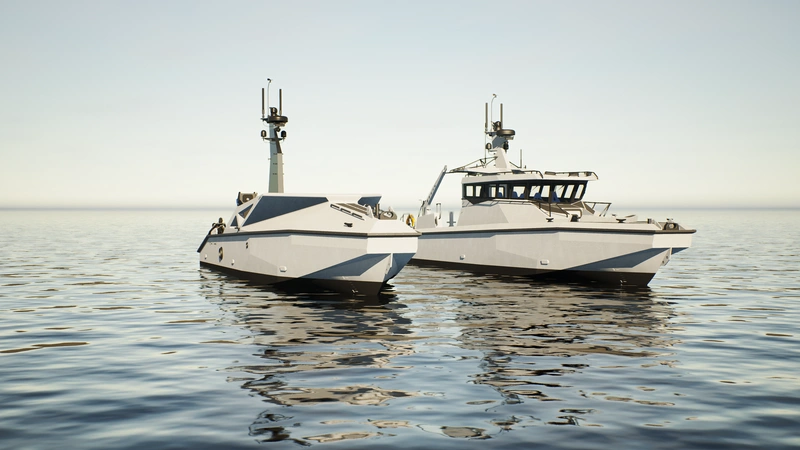 Metal Shark was selected by the U.S. Marine Corps to develop and implement the LRUSV System (Image: Metal Shark)