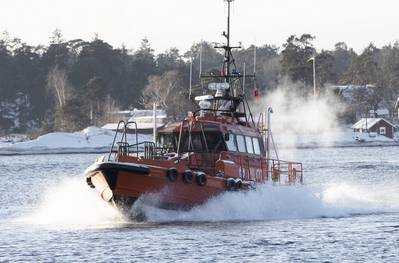 A pilot boat converted to run on methanol has entered service in Sweden as part of a demonstrator project aiming to prove the cleaner-burning fuel's ability to reduce carbon emissions.

On Tuesday, the FASTWATER Consortium and the Swedish Maritime Administration (SMA) successfully ran the vessel in Stockholm Harbor following methanol bunkering at the SMA pilot station in Oxelösund, Sweden, where the pilot boat will be based.

Methanol is among a number of alternative fuels currently being explored across the maritime industry as vessel owners and operators plot their course toward a lower carbon future. Use as a marine fuel is permitted within the International Maritime Organization’s (IMO) IGF Code with full flag state and classification society approval.

"The FASTWATER project demonstrates that methanol is a present and practical choice for application in ports and coastal shipping for all kinds of small craft, where there is an urgent need to reduce pollution," said Sebastian Verhelst, FASTWATER coordinator.

Albert Wiström, shipping inspector at the SMA, said, "The pilot boat is the link between shore and ship 365 days a year in all weather conditions; for this we need a robust, reliable energy solution with simple storage which makes methanol the best option."

Patrik Molander of engine supplier ScandiNAOS said, "This pilot boat is probably one of the cleanest ships on the water, world-wide because it operates on biomethanol; we have seen huge request for similar engines on the market."

The demonstration event, which was supported by the SMA and trade association The Methanol Institute, was addressed by members of the Swedish National Parliament Johan Büser and Anders Hansson, who spoke to the importance of alternative fuels like Methanol in reducing carbon and pollution emissions on a local and national basis.

"This launch shows that Sweden and the Swedish maritime sector is innovative regarding science and innovation and demonstrates the long tradition of business, politics and universities joining forces," Büser said said.