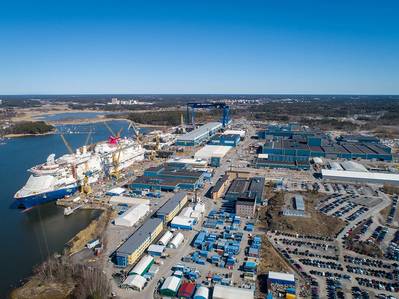 Finnish shipbuilder Meyer Turku said it will permanently lay off 84 people from outfitting and design functions upon the conclusion of YT-negotiations on Tuesday. The number includes nine blue-collar and 75 white-collar workers.

The shipyard, which specializes in cruise ship and large passenger vessel construction, has been hardly hit by the effects of the COVID-19 pandemic.

Including today's job cuts and another round of layoffs announced in August, Meyer Turku has let go 250 people, which is below its original estimate of 450 from the start of negotiations in April. The Turku shipyard on Finland's west coast employs roughly 2,000.

Part of the workforce reduction will be done through retirement and other personnel arrangements, and the shipbuilder said people being laid-off will be offered personal guidance, support and specialized training to ease the transition.

"Unfortunately we have to take some painful steps to adjust to the actual market situation that obviously has changed dramatically during this year. We are continuously working on securing the future of the yard on a long term basis," said Meyer Turku CEO, Tim Meyer.

In August, the shipyard concluded an agreement with its customers to stretch the fixed order book to reach until 2026. "This is an important step to stabilize the entire Finnish cruise ship building cluster until the market situation for new orders recovers again," Meyer Turku said.