Meyer Turku to Lay Off 166 Employees 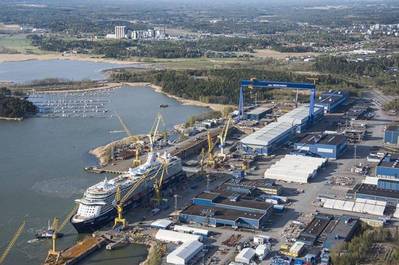 Finnish shipbuilding company Meyer Turku will permanently lay off 166 people due to the effects of the coronavirus pandemic on its business.

The company which builds cruise ships had in April said it would lay off up to 450 of its roughly 2,000 employees, with talks also in place for another 900 to be affected by other measures, such as temporary layoffs of different length, work time adjustments, and other arrangements.

Meyer Turku on Thursday said that the first part of permanent layoffs negotiations had come to a conclusion with a decision made to permanently lay off 166 people.

"The number at this point includes 86 blue collars and 80 white-collar workers. Due to the production schedules of the shipyard, the negotiations concerning outfitting, design, and HR functions will continue and will be finished during this year," Meyer Turku said.

"With the lay-offs, Meyer Turku will also start a transition program where everybody willing will get personal guidance, support, and specialized training to ease the transition," the company said.

The corona crisis has changed the landscape of cruise operation and shipbuilding drastically.

In April, Meyer Turku announced it would stretch out the order book to secure work for years 2025 and 2026.

Instead of ramping-up from one to two large ships delivered per year until 2023, the company in April said it expected to build just one large cruise ship per year.

At the onset of the coronavirus outbreak, Meyer Turku's order book included seven ships due for delivery through 2025.