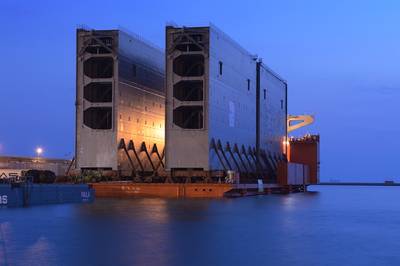 The first four new gates for the Panama Canal’s Third Set of Locks will be arriving to Panama from Italy on August 19th; one of the biggest milestones of the Expansion Program.

Additional Info:
The Third Set of Locks has a total of 16 rolling gates (eight for each new lock complex).The new gates weigh an average of 3,300 tons each. They were constructed in Italy by subcontractor Cimolai SpA. They will be unloaded in the Atlantic side of the Canal and rolled off the ship onto a special reception dock.

The Expansion Program has an overall progress of 60.4% and will build a new lane of traffic along the Panama Canal through the construction of a new set of locks, which will double the waterway’s capacity. The Third Set of Locks will make room for the transit of more cargo and larger vessels, having a direct impact on economies of scale.