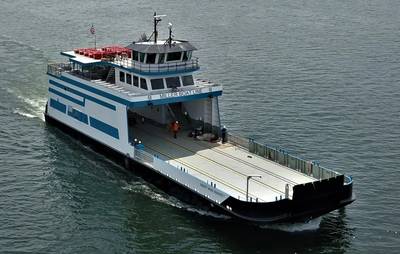 The ferry left the Sturgeon Bay, Wis. shipyard on July 8 and arrived to her home port Put-in-Bay, on Ohio's South Bass Island, on July 10. The vessel is expected to enter service following its U.S. Coast Guard inspection later this month.

The newbuild is named in honor of the company's late owner Mary Ann Market (1935-2010), "the backbone of the company", according to Jake Market, vice president at Miller Boat Line. The Lake Erie ferry operator has been owned and run by the Market family since it was purchased by Mary Ann and her husband Bill Market III—Jake's grandparents—in 1978.

The fifth vessel in the Miller Boat Line fleet, Mary Ann Market is also the largest at 140 feet long and 38.5 feet wide with a 7 foot draft. The drive on/drive off ferry has capacity for approximately 28 vehicles and up to 600 passengers, a 20% cargo capacity increase compared to the company's next largest vessel.

"We set out in 2017 to design a boat that was quiet, extremely reliable and was able to accommodate a mixture of passengers and trucks and standard automobiles as best as we could given the size constraints of our docks and the shallowness of the western basin of Lake Erie," Market said.

Ordered in 2018 for scheduled delivery in 2019, the build project was delayed by technical issues, with construction shifting from Fraser Shipyards to Bay Shipbuilding where it was ultimately completed.

"It was a long process," Market said. "Bay Shipbuilding was able to work upon their long history and experience building Great Lake passenger boats. And we were able to get the boat we wanted."

"We have a very tight turnaround at our docks. And because we want to be able to accommodate more passenger seating on the second deck, we needed to be able to make up speed on the run, to allow passengers enough time to get up and down the stairs and find their seats. We can't make the time up at the dock." Market said, noting the vessel did about 12.7 knots during trials.

"I'm thrilled with the boat's performance, and it's very quiet," Market said. "We spent a lot of money and time to try and get it that way. She's going to be a great all-weather boat."

The ferry's interior spaces are temperature controlled, and it features a main cabin with an ADA-compliant layout and restroom, as well as additional outdoor seating on the upper deck.

Miller Boat Line will run the vessel year-round except when there's ice on Lake Erie, making 16 trips per day. "It's a half hour from dock to dock, including loading and unloading. So we've got a half hour schedule the boat keeps and two boats running past each other to keep the schedule," Market said. "Depending on the day, she could haul upwards of 5,000 people."

Passenger vessel operators were among the hardest hit by the COVID-19 pandemic, but Market said he's seen business pick up significantly. "We're blessed with good business, and consumer sentiment seems strong. We've been very fortunate. And we've also been able to get a full complement of employees, which is what I think many have been worried about. We've been able to staff up, and we're staying busy. We're excited to get this new boat into service to help pick up some of the load."