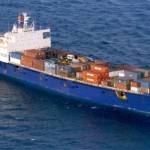 Search and rescue teams resumed scouring the seas on Monday for the missing cargo ship El Faro and it mostly American crew, after it was caught in the eye of Hurricane Joaquin four days ago, the U.S. Coast Guard said.

More than 70,000 square nautical miles have been searched so far, the Coast Guard said. On Sunday, aircrews found a debris field in the vicinity of the ship's last known position, including styrofoam, wood, cargo and other items.

There was no confirmation that the debris belonged to the El Faro, though one life ring found earlier was from the missing ship, the Coast Guard and Tote Maritime confirmed.

A 735-foot (224-metere) container ship with 28 U.S. citizens and five Polish nationals aboard, the El Faro left Jacksonville on Tuesday headed to San Juan, Puerto Rico. On Thursday, it reported losing propulsion, listing and taking on water after sailing into the path of Joaquin off Crooked Island in the Bahamas, the company said.

The Coast Guard said the ship has not been heard from since a distress call sent Thursday morning.

A 10 a.m. (1400 GMT) news conference is planned in Miami on Monday to provide an update on the search, the Coast Guard said.

Waiting for word on the fate of the crew, relatives gathered at a seafarers' union hall in Jacksonville, Florida on Sunday for an emotional meeting with the Coast Guard and the ship's owner, Tote Maritime Puerto Rico.

Barry Young, the uncle of a crew member, said the families still held out hope but conceded, "This is one that will require a miracle."

Philip Greene, president and CEO of Tote Services, part of the New Jersey-based Tote shipping company and which also includes Tote Maritime, said the captain of the El Faro had been watching the storm closely and had calculated he had enough room to steer to its west.

When the ship's engine broke down, "that left him in the path (of Joaquin)", Greene said.

Relatives of the crew have spoken highly of the ship's experienced captain, though some questioned the decision to sail into such a powerful storm.

Joaquin battered the central Bahamas archipelago for more than two days with 130 mile-per-hour (210 km-per-hour) winds, a potentially catastrophic Category 4 hurricane on a scale of 1 to 5.

"The ship should never have left," Rochelle Hamm, wife of one crew member, Frank Hamm, a father of five, told NBC News.

(Reporting by Susan Cooper Eastman in Jacksonville, Florida and David Adams in Miami)