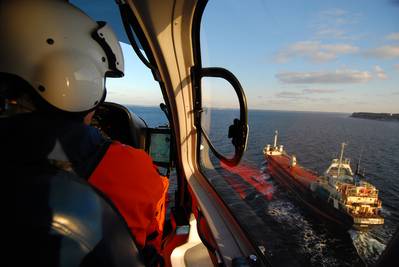 The Swedish coastal radio network is a cornerstone of search and rescue activities in Swedish waters and is considered to be the mariner’s communication lifeline. The Swedish Maritime Administration is now investing some SEK 50 million to improve and modernise the system. “The coastal radio network is a fundamental part of our maritime infrastructure. The planned investment will improve its stability and increase maritime safety even further”, says Jon Granstedt, the Administration’s President of Construction and Engineering.

The Swedish coastal radio network is owned and operated by the Swedish Maritime Administration and shipping has benefited from this vital communication “safety line” for many years. The system is mainly designed for search and rescue activities at sea, but is also used for piloting and navigation.

In emergency situations, both commercial and recreational shipping use the radio network to alert the SMA’s Joint Rescue Coordination Centre in Gothenburg, which in turn uses the same system to lead rescue efforts. The SMA decided on a modernisation programme because the current technology has become outdated and expensive to maintain. “The coastal radio network is a fundamental part of our maritime infrastructure. The planned investment will improve its stability and increase maritime safety even further”, says Jon Granstedt, President of Construction and Engineering at the SMA.

The improvements will be carried out in cooperation with Frequentis, an Austrian company specialising in communication and information solutions for safety-critical applications. The new Sweden-wide communications solution will draw on the Frequentis MCS 3020 IP system. This fully IP-based, open-architecture system complies in full with the EUROCAE ED-137B VoIP standard developed for the European aviation community. Frequentis will supply 55 operator working positions for 12 control rooms across Sweden, as well as over 300 IP-based VHF radios from Jotron.

Special attention will be given to the development of the graphical user interface (GUI) for control room operators. The aim in Frequentis GUI development is to let these operators concentrate on their tasks (e.g. coordinating search and rescue activities), rather than on the technology: “The usability focus helps operators make the right decisions, faster. The new operator consoles will adapt to existing processes and workflows, so operators can do their jobs easily and intuitively without having to deal with tech-related complications”, says Khashayar Saravandi-Rad, Director Business Unit Maritime, Frequentis AG, and “we are very proud to be able to provide the Swedish maritime community with our leading-edge technology. It will help increase the level of service provided to seafarers.”

“The investment is about SEK 50 million. However, the IP technology will reduce transmission costs, so the annual costs of the system will remain the same as today”, says Jon Granstedt.

The Swedish coastal radio system was originally built by Swedish Telegrafverket and consisted of a number of independent coastal radio stations. In 1994, these were amalgamated into a nationwide network of core switches. SMA has owned the system since 2003 and the radio network is also used by the Swedish Coast Guard, Stockholm Radio and the Swedish Armed Forces.