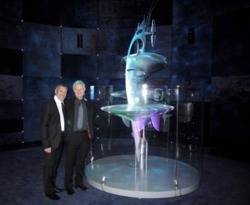 Part submarine, part research vessel, the 'SeaOrbiter' is currently on view at a Korean expo

It could be an alien spacecraft or a 21st century version of Captain Nemo's Nautilus from Jules Verne "20,000 Leagues Under the Sea," but in fact it's a live-aboard, ocean-going laboratory that could be exploring the seas as soon as late next year, says CNN in a recent news report.

Called the SeaOrbiter , the research vessel is the concept of French architect Jacques Rougerie. Currently the centerpiece of France's pavilion at Expo 2012 in Yeosu, South Korea, it has spent almost 12 years floating around as a mere concept. It recently completed its industrial design phase and construction is slated for October this year.

"All technical issues are resolved, all the modeling is done," says Ariel Fuchs, education and media director of the SeaOrbiter project. "We gathered institutional and industrial support five or six years ago and it's been a real institutional and financial project for the last two years."

It is expected to cost around $43 million and when built, will be 58-meters in height, taller than Nelson's Column, a monument in London. When launched, around 50% of the vessel will be below the water line, allowing for constant underwater study, Fuchs says.

"One of the first users will be the science community," he says. "It's designed to explore the ocean in a new way, mainly spending time under the sea, giving people the opportunity to live under the sea for a very long time, to observe, to undertake research missions, like marine biology, oceanography and climate issues."