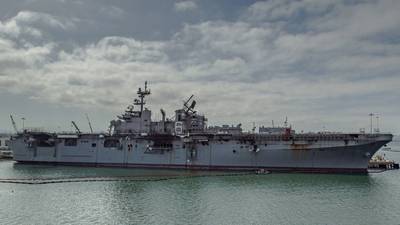 The U.S. Navy has begun the process to remove the island from the USS Bonhomme Richard (LHD 6) as part of an ongoing inactivation availability for the warship that was destroyed by a major fire in 2020.

Salvage contractor Smit Americas started the removal process Tuesday, the Navy said. Workers will reduce the island's height down to just above the flight deck to improve the ship’s structural integrity and readiness for tow.

The Navy announced at the end of 2020 it would scrap the Wasp-class amphibious assault ship after flames ravaged the vessel while it was docked for routine maintenance in San Diego in July.

Over the course of four days, the blaze spread from a lower cargo hold upward throughout much of the 844-foot-long warship and into the tower and other structures aboard the vessel, causing significant damage. The Navy had said work to restore the USS Bonhomme Richard would have required between five and seven years to complete and ran upwards of $3 billion.

The Navy said it is still working to determine the final timeline for towing away and dismantling the stricken vessel, and that all investigations associated with the fire are ongoing.

The Navy said decommissioning the USS Bonhomme Richard will likely cost at least $30 million, including inactivation, parts harvesting, towing and scrapping. A group of lawmakers proposed a less costly alternative, asking the Navy to scuttle the vessel to create an artificial reef off the Florida coast.