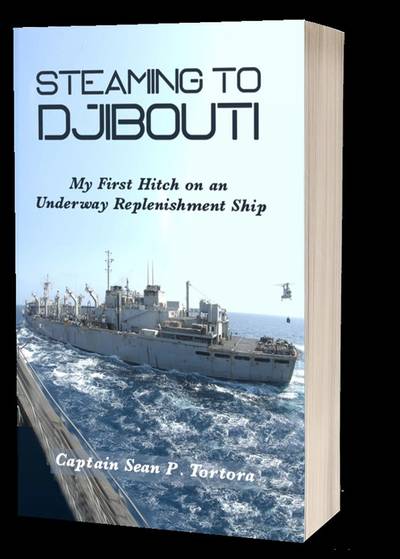 The following excerpts are from the new travelogue by Captain Sean P. Tortora, titled, “Steaming to Djibouti…My First Hitch on an Underway Replenishment Ship.”  Join a motivated young merchant marine officer on his first journey onboard a venerable navy auxiliary steamship. Accompany him through the convoluted reporting for duty process through his truly surreal first tour onboard. Meet the oddball characters in the crew and follow their outlandish daily routine. Listen in to the truly jaw-dropping crew interactions. Follow along through the myriad of hilarious adventures and astonishing experiences that can only be described as unbelievable. Along the way, you will find yourself alternating between shock and chuckles as you can’t wait to see what happens next!

“…Standing on a pier, alone, waiting for a ship... How did I arrive here…?  I came into this world Francis Kowalski Natale…

…I stood statue straight in the middle of pier with my suitcase at my right side, my briefcase hanging in my left hand, wearing my chino slacks, blue blazer, tie, and Vuarnet brand cat-eye sunglasses, all the while drenched with perspiration running down my face.  I could see the ship making its approach to the pier as I stood there silently waiting, thoroughly soaked to my skin in sweat…

…The ship was the USNS SHINNECOCK T-AOK 1, which was built as an experimental class, loosely based on the design of the U.S. Navy’s MISPILLION AO- 105 class of underway replenishment ships built after World War II. At 40,000 tons the SHINNECOCK was 725 feet in length overall, with a beam of 96 feet, and a deep draft of 37 feet. Her 35,000-horsepower steam turbine powered twin screws with a single rudder for a design speed of 25 knots. The ship was painted U.S. Navy haze gray and had a big number “1” on each side of the bow next to the anchors…

…As I stood outside the Captain’s office door with the Chief Mate while he knocked, I felt a sense of nervousness combined with a bit of excitement and adventure. Here I was getting ready to meet my first Captain on my first ship as Third Officer… As I prepared to walk into the Captain’s office, I contemplated that I always had an idealistic characterization of my first Captain. He would be a maritime academy graduate, maybe even a Ft. Schuyler alum, middle-aged with a weathered look, but very dignified and masculine. He would be well-spoken, witty, maybe even in an aloof sort of way; he would be wearing a neatly pressed uniform with eagles on his collar, clean shaven, with salt-and-pepper colored hair. He would be medium height and medium build and, finally,  would be of the utmost intelligence…. With that the door opened, and there sitting in a filthy room, at a desk covered in papers that were in no real order and bedraggled, sat a huge Cro-Magnon-like man. He had the head of a bulldog, with the jowls and frown lines to match, the little hair he possessed was gray and in a comb over, and he had the body of Jabba the Hutt from those Star Wars films. He wore a way too small dingy, food-stained, yellowed under-shirt with rips under his huge armpits. His immense fat rolls billowed out from under his t-shirt. But the worst was yet to see, for when he stood up, as I entered the office, he was not wearing pants; rather, he had on a pair of underwear, briefs at that, the old “tightie-whities.” You would think this objectionable mess would have had the decency to, at the very least, wear boxers, being so inclined to go so informally. Nope, not this cretin; he was sticking with the bikini bottoms for men. They were God-awful, stained yellow, with blowouts around the legs and rear, including strategically placed holes. They were nasty and funky, again with his rolls of fat bulging over the over-stretched waistband between where the grimy undershirt ended and his beastly briefs commenced….

…recall the SHINNECOCK, being an old girl, had two  Engineers on watch at all times, one at the control board in the engine room proper and another in the boiler room at the boiler’s front to direct the Fireman. Engineers have very complicated names for shipboard equipment, which sound extremely impressive and intricate, requiring oodles of skill and knowledge to operate, or God forbid, repair. Of course, any complicated machinery, either actual or just by nature of the name, requires a great amount of overtime to repair…just ask an Engineer. Sometimes I think the Engineers love confusing the Deck Officers with the use of three-syllable gobbledygook machinery terms. Case in point, the Engineers thoroughly enjoy speaking of the intricacies of the air handler or for us mere mortals, the fan. Then there is the purifier, which sounds a bit more impressive than a filter. There is the heat exchanger, when discussing a radiator. The common dimmer switch for a light goes by the moniker rheostat. Fiber- glass insulation is way too easy; better to use the convoluted nomenclature of lagging.  These examples are a  few of the Engineers attempts to confuse, befuddle, and confound the Deck Officers.

As my watch was progressing without incident, the dial tele- phone rings on the bridge. “Bridge, Third Mate,” I belch out.
I then hear the voice on the other end of the line, “Hey, this is the 3rd in the engine room. We are having a problem with the number three air handler.”

I perk up with this warning, “Is that serious?”

The old 3rd shoots back, “You better let the Captain know.”

Now I am fully aware of the (perceived) seriousness and reply, “Ok, I’ll let him know, call me when you get it fixed.” With that, I hung up the phone and immediately dialed 7-1-1, the number for the Bulldog’s stateroom. Even though I knew it was not a good idea to wake the sleeping bear, and he made that quite clear to me on my first watch, I had to notify him of an equipment problem or what I thought was such.

“WHAT DO YOU WANT?” Stone howled into the phone.

“Captain, my apologies, the 3rd  just notified me that he is having an issue with number three air handler,” I accurately reported. However, there was a distinct silence for what seemed like an inordinate amount of time, and then Stone blew his top, and I literally had to pull the phone receiver away from ear due to the din…”