New LNG ATB Bunker Vessel is a US First

Alan Haig-Brown began his career as a commercial fisherman on the B.C.... 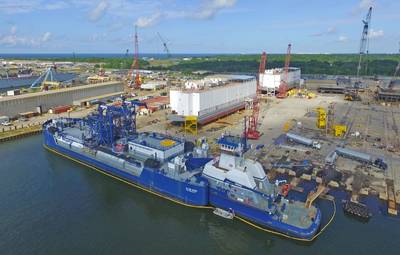 Bunkering ports around the world have long used a variety of small tankers or tug and barge combinations to deliver fuel to visiting ships. Mostly this was heavy oil, but recently a new breed of bunkering vessels is emerging to deliver clean burning liquefied natural gas (LNG) to modern ships with dual-fuel capabilities.

The fall of 2020 will see a new addition to this fleet servicing ships in Florida and the Caribbean. As an articulated tug barge (ATB) combination, the vessel will have a cargo capacity of 4,000 cubic meters of LNG. The tug, designed by Jensen Maritime and to be named Q-Ocean Services, is 128 by 42 feet with a molded depth of 21 feet. It will operate while fitted in the stern notch of the 324- by 64-foot barge designed by Waller Marine. The barge has a molded depth of 32.5 feet. Both vessels' detail design was done by Halter Marine under mutual agreements.

Propulsion power on the tug will be a pair of 1,900-kilowatt (2,548 horsepower), Wabtec 6L250 MDC EPA Tier 4 and IMO III main engines, with Wärtsilä Z-drives. This will give the ATB a 10-knot design speed with an estimated 65-ton bollard pull. The tug will have tankage for 105,686 gallons of diesel fuel, while the barge will have tanks for 13,890 gallons of diesel. The ATB will be ABS-classed, capable of dynamic positioning DPS 1+. The tug will have accommodation for up to 12 crew including tanker-men. The tug will also be equipped with two reverse osmosis water makers capable of producing 2,000 gallons of fresh water per day.

Auxiliary power, servicing a wide range of functions on both the tug and the barge, will be provided by a total of nine Cummins marine engines. The tug has two QSM11-DM powered 150-kilowatt SSDGs. These engines are fitted with through shafts that can also run fire pumps, including those supplying two off-ship monitors. The tug will additionally have a single Cummins QSB7-DM-powered, 99-kilowatt harbor generator, and a QSB7-DM-powered, 79-kilowatt emergency generator.

The barge, with large power demands, has five, QSK19-DM-powered, 450-kilowatt generators. These will power a range of functions on the barge including four mooring winches and two hose handling cranes. The tug will also have two stores cranes, one forward and one aft. The barge is fitted with a ballast water treatment plant provided by Wärtsilä as well.

Initial clients for the new vessel will be Carnival Cruise Line’s two new dual-fuel ships and two dual-fuel Siem Car Carrier ships under charter to the Volkswagen Group to transport vehicles from Europe to North America. The ATB is being constructed to meet U.S. flag requirements, as well as ABS Class and the requirements of the IMO International Gas Carrier Code.

The first LNG ATB bunker vessel built in the U.S., Q-LNG 4000 is currently on sea trials from Halter Marine in Pascagoula, Miss. and will soon be delivered to Quality Liquefied Natural Gas Transport, which is owned by Harvey Gulf International Marine’s CEO Shane Guidry. Shell has signed a long-term charter for Q-LNG 4000, which will operate out of Port Canaveral, Fla.

Q-LNG, with Chad Verret as President, has also signed a letter of intent for an 8,000-cubic-meter LNG ATB unit with Halter Marine, but that has not as yet been firmed up as an order. 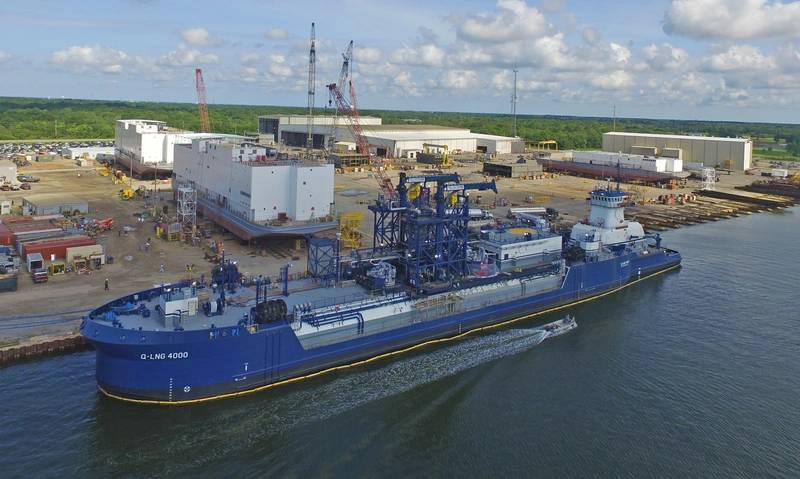