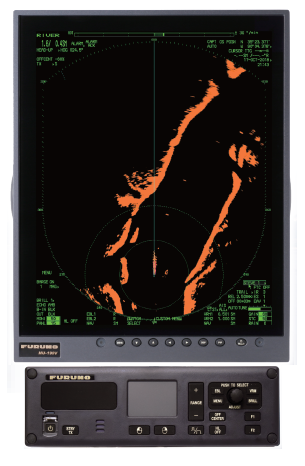 In 2018, Furuno introduced a new generation of River Radars with the release of the FR1908VBB, a 4kW Black Box Radar with a portrait display (vertical screen orientation) that allows mariners to see more detail ahead of the vessel, where it counts.

Now, Furuno has introduced the second in the series, the higher-powered FR1918VBB River Radar. With a 12kW output and all of the same critical features and functionality of its "little brother", the FR1918VBB will enhance the situational awareness of any river vessel.

Navigating inland rivers presents a unique set of challenges, and workboats on these demanding waterways require tools that will enhance the navigator's ability to do the job safely and efficiently. The FR1918VBB Radar uses a custom river mode with an ultra-short pulse length that provides navigators with superior bank, buoy and vessel detection. The Radar's ten preset towing configurations, custom icons, and ability to show distance measurements in inland units further enhance the capabilities of this purpose-built River Radar. The Radar's range rings are measured in the standard river units of statute miles, and barge icons can be displayed with length and width measurements in feet, and rudder position can also be displayed on-screen.

The FR1918VBB is a natural fit with Furuno's MU190V 19" marine-grade portrait display, but an "off-the-shelf" portrait display can also be utilized. The processor outputs dual video signals in high resolution (1280 x 1024). The Radar's 12kW output power along with Furuno's superior target detection ensure you'll see every target on the river. The Radar's six NMEA input/output ports makes interfacing with other electronics a breeze, and a direct connection to a VDR or SVDR is also available to further simplify installation. Dual SD card slots allow for the capture of screenshots, and can also be used for system configuration backup and restoration.

The Radar's Black Box processor provides a simple 1-plug connection to one of Furuno's high-accuracy Satellite Compass offerings to provide real-time rate of turn, position, course/speed, and three-axis speed information, providing high precision data for towing and docking maneuvers. The Radar can be controlled from its included slim-design controller with integral touchpad. An optional trackball controller can be added from which the entire system can be operated.

The FR19x8VBB series is available in both 4kW and 12kW open array versions, both utilizing Furuno's proven, commercial-grade gearbox and a choice of either 6.5' or 8' antennas. With dedicated river-specific modes, a host of new features, and Furuno's history of delivering rock-solid commercial equipment, the FR19x8VBB Radar series is the right pick for modern brown water workboats.