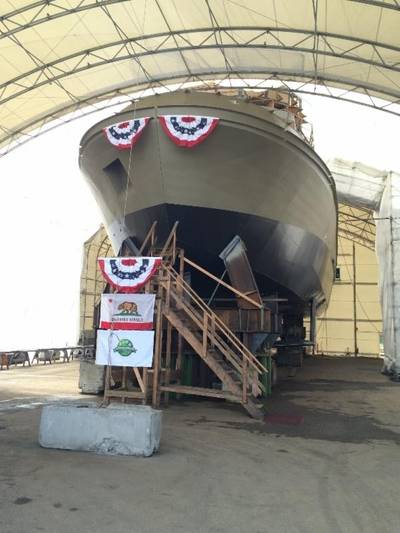 The first of two new fireboats built by Foss Maritime for the Port of Long Beach (POLB) was dedicated in a blessing ceremony on Thursday, May 1 at Foss Maritime's Seattle Shipyard, the company said.

The vessel, named Fireboat 20, is being readied for service and is slated for delivery to Long Beach, Calif., this summer.

Xavier Espino, Battalion Chief of the Long Beach Fire Department, and his wife, Colleen, broke the ceremonial bottle of champagne across the Fireboat 20's hull.

According to Foss, Fireboat 20 has a Voith Schneider Cycloidal propulsion system that allows for exceptional maneuverability, a firefighting system with a pumping capacity of 41,000 gallons per minute, and seven caterpillar engines. It is designed to be a state-of-the-art command center, with a CBRN System that protects the firefighters from chemical, biological, radiological and nuclear threats.

A second fireboat for the POLB is under construction and is scheduled for deliveryin late 2014 or early 2015.