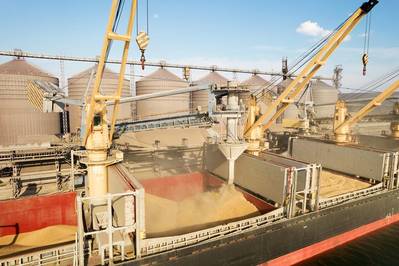 A further ten cargo ships are being loaded with grain in Ukrainian Black Sea ports and being prepared for shipment under a food export agreement brokered last month, Ukraine’s Infrastructure Minister Oleksandr Kubrakov said on Friday.

Ukraine’s grain exports have slumped since the start of the war because its Black Sea ports - a vital route for shipments - were closed, driving up global food prices and prompting fears of shortages in Africa and the Middle East.

At the end of July, three Black Sea ports were unblocked under a deal between Moscow and Kyiv, brokered by the United Nations and Turkey.

“Ten vessels are currently being loaded and are preparing to leave the ports of Odesa, Chornomorsk and Pivdennyi. We also have more than 40 applications for shipping to Ukrainian ports,” Kubrakov said on Facebook.

He said 25 ships had already been dispatched from the three Ukrainian ports with 630,000 tonnes of agricultural products on board.

U.N. Secretary-General Antonio Guterres who visited Odesa on Friday, said there was much to do to ensure full global access to Ukrainian food products and Russian food and fertilizers after the U.N.-brokered food export deal.

Ukraine’s agriculture ministry said on Friday the country’s grain exports are down by 51.6% year-on-year at 2.99 million tonnes so far in the 2022/23 season.