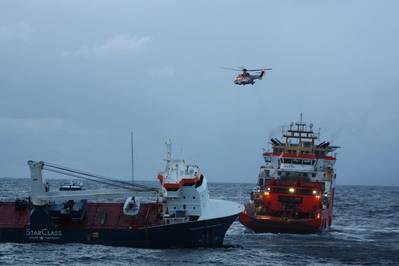 A Dutch cargo ship that was abandoned at sea during a storm off the coast of Norway this week has been attached to two large tugboats and is no longer at risk of running aground, local officials said late on Wednesday.

The Eemslift Hendrika, badly listing after parts of its cargo shifted in the rough weather, had been adrift since Monday, leading to fears it would spill some or all of the 350 tonnes of heavy oil and 50 tonnes of diesel in its tanks.

The Norwegian Coastal Administration (NCA) on Wednesday evening lowered a crew onto the vessel from a helicopter as part of the salvage operation.

“Tow lines have now been established between the stricken vessel and the tugs. The risk of a grounding has been averted,” the NCA said in a statement.

The Hendrika would likely have made landfall during the night if the salvage operation had failed, risking a spill, the NCA added.

Footage released by the Norwegian Rescue Coordination Center on Tuesday showed some of the original crew members jumping into the sea before being rescued by helicopter. Others were hoisted directly from the deck.

The Coastal Administration earlier on Wednesday said it had invoked a government mandate to resume full operational command over the salvage operation, and that equipment had been mobilized along the coast to combat the spread of any oil spill.

Built in 2015 and registered in the Netherlands, the 111.6 meter Eemslift Hendrika is a yacht transport vessel, carrying smaller boats on its deck.

It will now be towed to the port of Aalesund, the NCA said.

(Reporting by Terje Solsvik in OsloEditing by Matthew Lewis)