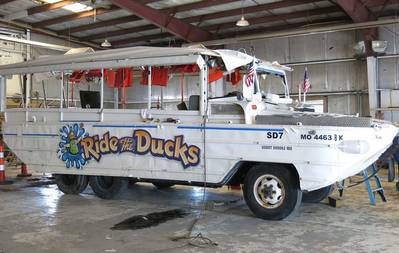 The Stretch Duck 7, a modified WWII DUKW amphibious passenger vessel, shown in this July 25, 2018 after it was recovered from Table Rock Lake near Branson, Mo. following its sinking during a heavy-winds storm July 19, 2018. (Photo: NTSB / Brian Young)

Seventeen of the 31 people aboard the modified WWII DUKW amphibious passenger vessel, or "duck boat", Stretch Duck 7 died, when the vessel sank during a rapidly developing high-wind storm on Table Rock Lake near Branson, Mo.

As part of its ongoing investigation into the July 19, 2018 accident, the National Transportation Safety Board (NTSB) issued a marine safety recommendation report on Wednesday that calls upon the U.S. Coast Guard to require new safety measures, including rules to ensure sufficient reserve buoyancy for DUKW amphibious passenger vessels, and to require the removal of canopies, side curtains and their associated framing, while underway, for those without sufficient reserve buoyancy.

“Lives could have been saved, and the Stretch Duck 7 accident could have been prevented had previously issued safety recommendations been implemented,” said NTSB Chairman Robert L. Sumwalt.

“The NTSB’s 1999 investigation of the another DUKW, the Miss Majestic, also identified the lack of reserve buoyancy and the dangers of canopies as safety issues. In 2008, recommendations from that accident addressing these safety issues were classified ‘Closed-Unacceptable Action’ due largely to inaction. Twenty years later, the same risk exists on these vessels, and that is unacceptable,” said Sumwalt. “It is imperative that the United States Coast Guard adopt these life-saving recommendations now.”