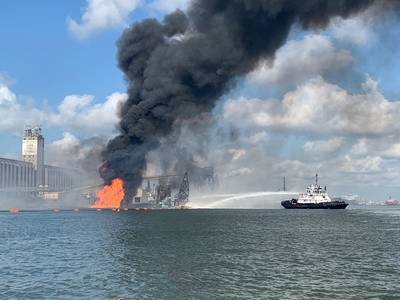 The National Transportation Safety Board issued 10 safety recommendations Tuesday during a public board meeting held to determine the probable cause of the fatal August 21, 2020, hazardous liquid pipeline strike and subsequent explosion and fire aboard the dredging vessel Waymon Boyd.

The Waymon Boyd struck a submerged 16-inch hazardous liquid pipeline carrying propane during dredging operations in Corpus Christi, Texas. A geyser of propane gas and water erupted adjacent to the vessel. Shortly thereafter, propane gas engulfed the dredge and an explosion occurred. Fire damaged the vessel and surrounding shoreline. A total of 18 personnel employed by Orion Marine Group were working or resting on the dredge and assist boats (tender boats, anchor barges, booster barges and a supply barge) on the day of the accident. Three crewmembers aboard the Waymon Boyd and one on an adjacent anchor barge died in the explosion and fire. Six crewmembers aboard the dredge were injured, one of whom later died from his injuries. The Waymon Boyd, owned by the Orion Marine Group, was a total loss valued at $9.48 million. The cost of pipeline damage was $2.09 million.

The Enterprise Products’ pipeline TX219 was struck by the Waymon Boyd’s rotating cutterhead, causing a breach in the line that allowed propane to escape and form a gas cloud that surrounded the dredge. Although the Waymon Boyd leverman attempted to swing the dredge away from the geyser of water that was carried with the escaping propane, the vessel was less than 200 feet away from the pipeline breach, and the expanding gas cloud enveloped it. Investigators concluded that propane gas released from the pipeline was drawn into the Waymon Boyd’s engine room by the ventilation fans and was ignited, causing the explosion.

The NTSB determined the probable cause of the accident was Orion Marine Group’s inadequate planning and risk management processes, which failed to identify the proximity of their dredging operation to Enterprise Products’ pipeline TX219 and resulted in the absence of effective controls to prevent the dredge’s cutterhead from striking the pipeline. Contributing to the accident were deficient dredging plans provided by Schneider Engineering and Consulting, which resulted in incomplete and inaccurate information communicated to Enterprise Products by Orion Marine Group during the one-call (call before you dig) process, which resulted in insufficient measures to protect the pipeline from excavation damage.

The safety recommendations seek for the companies involved in the accident to implement or update policies and procedures for dredging near pipelines, and for a federal regulator and industry organizations to develop additional guidance and training specific to pipeline protection for marine dredging projects and to establish tolerance zone guidance for marine construction and dredging projects near pipelines.

“We have seen time and time again that tragedies happen when parties fail to have the appropriate policies and procedures in place for safety,” said Chair Jennifer Homendy. “Orion Marine Group’s inadequate planning led to this tragic event and cost lives. It is absolutely critical that when excavators conduct any dredging operations near underwater pipelines that proper precautions are in place to ensure safety.”

According to the report, NTSB concluded that marine dredging projects require a greater level of collaboration and review between pipeline operators and dredging companies than the one-call process provides because of the challenges associated with marking marine pipelines and the lack of precision associated with dredging operations. In addition, third-party damage prevention efforts would be improved if dredging companies obtained accurate location data from pipeline operators for pipelines within and near dredging project boundaries to incorporate into dredge control software files.

The executive summary, probable cause, findings, and safety recommendations are in the report abstract available on the investigation web page. The final report will be published on the NTSB website in several weeks.