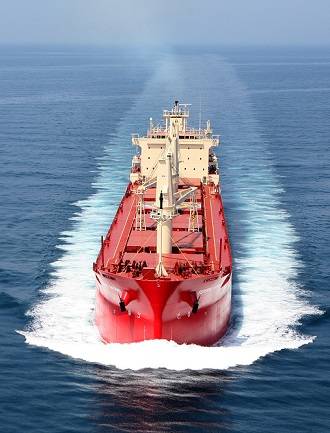 Fednav ships are designed with the environment in mind. (Photo: Fednav Ltd.)

Fednav Limited, the largest international maritime bulk carrier in Canada, announced the addition of six new vessels to its fleet. Ordered with Sumitomo Corporation and Oshima Shipyard, the environmentally advanced vessels will be built in Japan and will add substantial capacity to its Great Lakes-capable fleet of ships.

A New Generation of Lakers
As highly flexible vessels well suited to international trade, the 34,000-ton bulk carriers are adapted to the dimensions of the St. Lawrence Seaway and are specially equipped for navigating in ice.

These vessels will be built with “box” holds, better suited to a variety of general cargo like steel and project cargo. Their design will also streamline operations, minimizing time and effort to reduce cargo residues and will result in more efficient port calls.

“This investment highlights Fednav’s commitment to the Great Lakes, and to our customers and partners in the industrial heart of North America,” explained Paul Pathy, Fednav President and Co-CEO, upon signing of the contract. “The Great Lakes St. Lawrence System is a very valuable part of the two countries’ economies. This order by Fednav demonstrates our clear goal to remain the leader in International Great Lakes shipping.”

Environmental Benefits
These vessels will share the environmental characteristics of the previous six Lakers ordered at the Oshima shipyard: they will consume 28% less fuel and produce 28% less emissions than vessels built by Oshima Shipyard for Fednav ten years ago, ships already among the most efficient of their time. This will contribute significantly to Fednav’s objectives of reducing GHG emissions in its fleet on a continuous basis. The fuel-efficient engines will also reduce nitrogen oxide emissions by approximately 33%. All of the vessels will receive the CLEAN-DESIGN notation from the DNV classification society.

Fleet
The six additional vessels will be delivered between May and November 2015, as part of a series of 27 new ships (of which 14 are Lakers) added to Fednav’s fleet since January 1, 2012. Fednav currently operates more than 80 vessels, half of them owned, and it has the largest fleet of ice-class vessels in the world—vessels capable of navigating demanding winter conditions along the St. Lawrence Seaway, in the Baltic Sea and even in the Arctic.