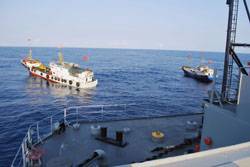 Two Chinese trawlers stop directly in front of the military Sealift Command ocean surveillance ship USNS Impeccable (T-AGOS-23), forcing the ship to conduct an emergency "all stop" in order to avoid collision. The incident took place in international waters in the South China Sea about 75 miles south of Hainan Island. The trawlers came within 25 feet of Impeccable, as part of an apparent coordinated effort to harass the unarmed ocean surveillance ship. (U.S. Navy photo/Released)

Five Chinese vessels shadowed and maneuvered close to the USNS Impeccable in the March 8, a senior Pentagon official said March 9.

"We view these as unprofessional maneuvers by the Chinese vessels and violations under international law to operate with due regard for the rights and safety of other lawful users of the ocean," Whitman said.

A civilian crew mans the ship, which operates under the auspices of the Military Sealift Command.

Crewmen aboard the Impeccable used fire hoses to spray one of the vessels as a protective measure. The Chinese crewmembers disrobed to their underwear and continued closing to within 25 feet.

The Chinese vessels dropped pieces of wood in the water directly in the Impeccable's path, and two of the ships stopped directly in the vessel's path, forcing it to stop.

Whitman said the Chinese used poles in an attempt to snag the Impeccable's towed acoustic array sonars. Impeccable's master used bridge-to-bridge radio circuits to inform the Chinese ships in a friendly manner that it was leaving the area and requested a safe path to navigate.

"These are dangerous close maneuvers that these vessels engaged in," Whitman said.

The incident was the culmination of earlier harassment. A Chinese patrol vessel shined a high-intensity spotlight March 4 on the USNS Victorious operating in the Yellow Sea 125 miles from 's coast. Chinese maritime aircraft "buzzed" the ship 12 times March 5.

A Chinese frigate crossed the bow of the Impeccable at a range of about 100 yards March 5. Maritime aircraft buzzed the ship after that incident.

Another Chinese ship challenged Impeccable over bridge-to-bridge radio March 7, calling its operations illegal and directing the American ship to leave the area or "suffer the consequences," officials said.

The Impeccable is one of six surveillance ships that gather underwater acoustical data, Whitman said. ships routinely operate in the area.

"We expect Chinese ships to act responsibly and refrain from provocative activities that could lead to miscalculation or a collision at sea, endangering vessels and the lives of and Chinese mariners," a Defense Department official said.

embassy officials lodged a protest against these actions with the Foreign Ministry in , and Defense Department officials have protested with the Chinese embassy here.