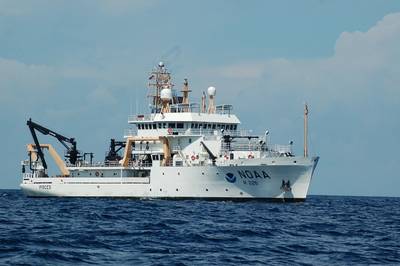 Last week, the Senate Appropriations Committee marked up and approved a Commerce, Justice, Science bill that would provide $75 million to build a new Regional Survey Vessel for the National Oceanic and Atmospheric Administration (NOAA) and $159 million for the design and construction of three Regional Class Research Vessels (RCRV) for the National Science Foundation (NSF).

The Shipbuilders Council of America (SCA) lauded the measure, which is the first step to build new vessels essential for NOAA and NSF to maintain critical survey, data collection and research capacity.

“We applaud the Senate Appropriations Committee and its recognition of the real need to build quality oceanographic vessels that will enable NOAA and NSF to provide survey and research support for thousands of stakeholders from academia, government, and the public sector,” said Matthew Paxton, President of the SCA.  “Not only is the Committee investing in these critical ships, but also in the U.S. shipyard industrial base which provides essential manufacturing capabilities for all U.S. agencies, including the U.S. Navy, Coast Guard and Marine Corps.”
NOAA currently has 16 ships in its fleet, but that number will dwindle to eight ships by the year 2028 due to the aging out of the vessels.  NOAA will need to build not one, but eight vessels in the next two to four years to continue its essential functions. And by NSF having three regional ships, the Gulf of Mexico and the East and West coasts will be able to have their own dedicated RCRV to maximize research time in each region.
Including building the most sophisticated research vessels in the world, the U.S. shipbuilding and repair industry also builds, repairs and maintains U.S. Navy ships as well as vessels of all sizes for the U.S. Coast Guard.  The industry supports more than 500,000 jobs nationwide and contributes more than $39 billion annually to the U.S. economy and according to the U.S. Maritime Administration, there are direct or induced U.S. shipyard jobs in all 435 Congressional districts.