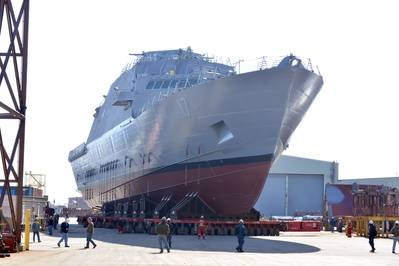 The future littoral combat ship USS Indianapolis (LCS 17) is moved from an indoor production facility in Marinette, Wisc., to launchways in preparation for its April 14 launch into the Menomenee River. (U.S. Navy photo courtesy of Marinette Marine by Val Ihde)

The U.S. Navy could build its strength to 355 ships over a decade earlier than previously thought due to an increased shipbuilding budget and tempo as well as extending the service for some ships in the current fleet, a Pentagon official told a Congressional panel on Thursday.
The goal of a larger Navy, one of President Donald Trump's signature issues from the campaign trail, could be achieved in the 2030s instead of the 2050s, the Assistant Secretary of the Navy for Research, Development & Acquisition, James Geurts told the U.S. House of Representatives Armed Services Subcommittee on Seapower and Projection Forces during a hearing on Capitol Hill.
Executing on a more robust shipbuilding plan, coupled with extending the service life of the DDG-51 destroyer class, and targeted service extensions of other ships, "provides an achievable strategy to accelerate reaching our goal of reaching 355 ships from the 2050s to the 2030s," Geurts told the panel.
The 2018 budget funded fourteen ships which Geurts said was a boost of 5 ships over past plans. The Navy's 2019 budget request seeks additional ships.
The two largest U.S. shipbuilders are General Dynamics Corp and Huntington Ingalls Industries Inc.
Jennifer Boykin, president of Huntington's Newport News Shipbuilding yard in Virginia, told reporters earlier this week that her company was hiring 400 employees a month in order to meet a goal of 23,000 later this year.
Huntington Ingalls is in the running to build one, or possibly two aircraft carriers in the coming years, each of which could cost more than $13 billion. Geurts told the Congressional panel on Thursday the Navy could know more about that selection process and Huntington's bid in the early summer.
As of Thursday, the U.S. Navy said it has 282 deployable battle force ships.