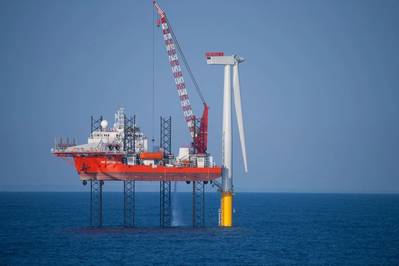 The United States has an opportunity to accelerate offshore wind energy growth, and benefit from 28 new gigawatts of wind power and $1.7 billion in U.S. Treasury revenue by 2022, according to a study released by the energy intelligence group Wood Mackenzie.

According to the press statement issued Tuesday, findings from the study confirm additional lease areas are needed to meet demand, reduce energy costs, increase competition, and ultimately generate thousands of jobs and billions in investment.

Based on existing activities and policy assumptions for future offshore wind development, two million acres of federal waters in the New York Bight, which includes parts of New Jersey, as well as California and the Carolinas, could be auctioned for commercial leases as early as this year as well as in 2021.

Significant capital investment is expected to be made to support offshore wind activities in the U.S.

When it comes to job creation, if the assumed BOEM auctions in 2021 and 2022 happen, the report foresees a total full-time equivalent (FTE) job creation from the resulting offshore wind activities, including development, construction and operation will be approximately 80,000 jobs annually from 2025 to 2035.

According to the report, the types of jobs needed to support this growing industry are varied and will require a supply chain that stretches well beyond coastal communities. While the bulk of full time equivalent (FTE) jobs are concentrated in the nearer term, operations and maintenance jobs will be needed for decades past construction.