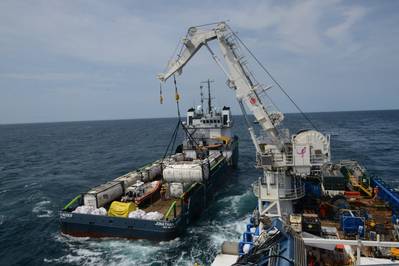 Crews aboard M/V SHELIA BORDELON offload more than 450,000 gallons of oil from the Coimbra shipwreck 30 miles offshore from Shinnecock, N.Y. U.S. Coast Guard responders discovered a significant amount of oil in cargo and fuel tanks during onsite assessments of the Coimbra in May 2019. (US Coast Guard photo by Michael Himes)

Operations to recover oil from a World War II-era shipwreck are nearing completion after commencing on May 11, 2019 off the coast of Long Island, N.Y., the U.S. Coast Guard said on Thursday.

The sunken vessel, Coimbra, was a supply ship owned by Great Britain that was torpedoed by a German U-boat off the coast of Long Island during World War II. Initial dive operations in May 2019 confirmed the tanker was leaking small amounts of oil, the Coast Guard discovered.

A unified command consisting of the Coast Guard and New York State Department of Environmental Conservation oversaw the response supported by more than 100 government, industry and environmental specialists.

As much as 99 percent of the recoverable oil was removed and secured for disposal by Resolve Marine. “The amount remaining in the vessel is very small and any sheening poses minimal risk to the local environment and no risk to the shoreline.” said Steve Lehmann, senior scientific coordinator at the National Oceanic and Atmospheric Administration. Any further potential environmental impact will be monitored by NOAA and the Coast Guard.

The wreck will remain in place 30 miles offshore of Shinnecock, N.Y.

“Each agency involved during the planning, assessment and recovery stages of the response played a critical role.” said Capt. Kevin Reed, the Coast Guard incident commander. “Our federal, state, local and commercial partners and response crews ensured a safe, efficient and productive operation. We applaud their diligence and tremendous work.”

DEC Commissioner Basil Seggos said, “DEC thanks the Coast Guard for collaborating with New York State throughout this large-scale oil recovery operation. The 450,000 gallons removed from the Coimbra over the last three months were a hidden threat to the health of Long Island’s marine fishery and the South Shore’s environment and now the potential impact has been abated. The Coimbra now complements New York’s growing network of artificial reefs, which serve as an economic driver for the region’s diving and fishing industries.” 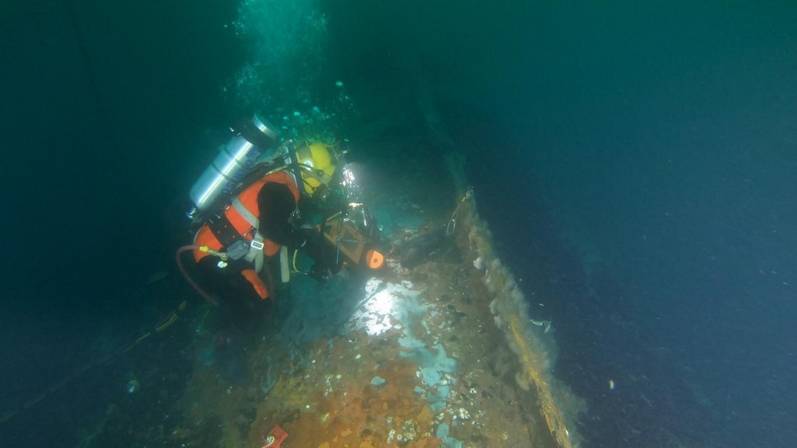 Divers securely drill into and access the oil tanks of the wreck of the British-flagged tanker Coimbra, May 8, 2019. (U.S. Coast Guard photo courtesy of Sector Long Island Sound)