One Million Gallons Collected from US' Longest Running Oil Spill 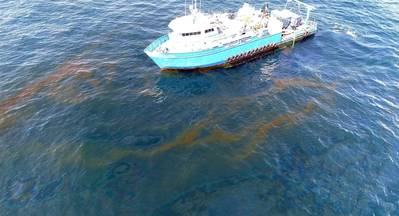 Response crews have collected more than one million gallons of oil from a Gulf of Mexico spill that has been ongoing for nearly 20 years.

The U.S. Coast Guard (USCG) and partner agencies have been working to contain oil that continues to leak from damaged wells in Mississippi Canyon Block 20 (MC-20), located 11 miles south of the Louisiana shoreline, after storm surge from Hurricane Ivan in 2004 triggered an underwater mudslide that toppled Taylor Energy's MC-20 platform. The active spill is the longest-running in U.S. history.

The collapse damaged about two dozen oil wells, and in 2007 the federal government ordered Taylor Energy to plug and abandon those that were leaking. In 2008 the government entered into a trust agreement with Taylor funding the remaining work.

Following multiple federal- and industry-led scientific studies, the Coast Guard issued an administrative order in October 2018 requiring Taylor Energy to propose a final viable plan to install a containment system. The next month, the Coast Guard issued the company a Notice of Federal Assumption, and assumed authority for containing the oil.

Since April 2019, oil has been captured, contained and removed from the site while experts develop a permanent plan to decommission the wells. A subsea containment system designed, fabricated, installed and operated by the USCG-hired Couvillion Group, LLC, specifically in response to this incident has been collecting an average of 900 gallons of oil per day.

As of July 12, 2022, 1,016,929 gallons of oil have been collected from the MC-20 site by the Coast Guard and partner agencies, according to the Coast Guard, which is overseeing the cleanup.

“The near elimination of the surface sheen and collection and removal of more than one million gallons of oil from the site over the previous three years is a major milestone in the Coast Guard’s efforts to contain the MC-20 oil spill that has affected the waters off the Gulf Coast for years,” said Capt. Kelly Denning, the Coast Guard’s Federal On-Scene Coordinator for the incident. “Though the containment system is considered a great success, the federal government is exploring all available response options, including to properly decommission the impacted wells on site.”

A December 2021 settlement required Taylor Energy to transfer all remaining funds in the Taylor Energy Decommissioning Trust to the United States to properly decommission the oil wells that were originally connected to the downed platform.

The response to the active oil spill continues to be led by the Coast Guard with support from federal partners, including the Bureau of Safety and Environmental Enforcement (BSEE) and the National Oceanic and Atmospheric Administration (NOAA).

The Coast Guard said it is currently gathering subsurface data intended to support future federal efforts to decommission the MC-20 wells and ultimately bring the incident to a closure.

Illustrations of how the Taylor MC-20 platform in the Gulf of Mexico appeared before and after damage from Hurricane Ivan in 2004. The third panel shows the containment system installed to capture oil from persistent leaks. (Image: Kate Sweeney / NOAA)