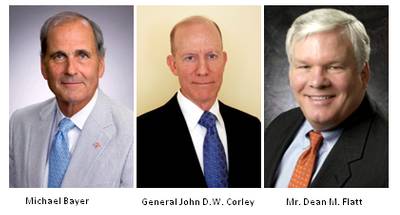 The Honorable Michael Bayer has enjoyed a successful career in both the U.S. Government and private sectors, with particular focus in national security and energy issues. Mr. Bayer recently served as Chairman of the Defense Business Board, the principal independent source of economic, financial and managerial advice for the Secretary of Defense and the Chairman of the Joint Chiefs of Staff. He is currently President and CEO of Dumbarton Strategies, which provides strategic planning support to enterprises engaged in the energy and national security sectors. Mr. Bayer also serves as a Director of Siga Technologies Inc. (NASDAQ) and Willbros Group Inc. (NYSE). In addition, he is a Member of the Sandia National Laboratory's National Security Advisory Panel, the Defense Science Board and the Chief of Naval Operations' Executive Panel.

General John D.W. Corley retired from the U.S. Air Force in 2009 after a distinguished career spanning nearly 37 years. A graduate of the Air Force Academy, General Corley served as an operational pilot both in combat and as an Instructor Pilot. General Corley rose through the ranks serving in staff positions comprising a mix of operational and joint duties from Tactical Air Command, U.S. Air Forces in Europe, Headquarters U.S. Air Force and the Joint Staff. After moving to program management and acquisition, General Corley served as the Vice Chief of Staff then as Commander, Air Combat Command. In this role, he was the lead agent for developing strategy, doctrine, concepts and procedures for air and space power. General Corley is an experienced strategic planner and a skilled international collaborator in the planning and development of major weapon systems. He now consults to the defense industry.

Mr. Dean M. Flatt has enjoyed a successful career in the aerospace industry. Until 2009, Mr. Flatt was President and Chief Operating Office of Honeywell's Defense and Space Business, the world's most diverse manufacturer of military and space components and subsystems. Previously, Mr, Flatt held numerous senior level positions at Honeywell, serving as President of Honeywell's Aerospace Electronics Systems Business, President of the Specialty Materials and Chemicals Business and Vice President and General Manager of its Defense and Space Electronics Business. Mr. Flatt currently serves as an independent Director of Ducommun, Inc. (NYSE), a leading aerospace company, Director of Cleaver Brooks, LLC, a commercial boiler manufacturer, and member of the Board of Trustees for Hope House, a charitable organization.