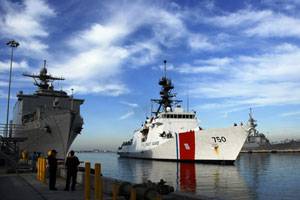 Bertholf's crew conducted a shakedown of the ship's systems and carried out flight operations, small-boat operations and weapons testing.

A primary goal of the patrol was to complete flight tests – known as dynamic interface testing – to determine the limits of wind and sea conditions in which a helicopter can land safely upon Bertholf's flight deck.  Dynamic interface testing involves repeated take-offs and landings from a vessel's flight deck in increasing wind and sea conditions in daylight, darkness, and in darkness using night vision goggles.  Bertholf's crew, working in concert with a test team from the U.S. Navy's Naval Air Systems Command, established safety parameters that will be used aboard Bertholf and all future Legend-class National Security Cutters.

"The Bertholf is a unique and improved landing platform for a number of reasons," said Lt. Cmdr. Scott Weaver, a rotary-wing test pilot for the Coast Guard.  "It has the largest flight deck of any cutter in the Coast Guard.  Its lighting system is new and at night can easily be switched between full lighting and low-level lighting for use with night vision goggles."

Bertholf's crew also conducted tests of other equipment systems including the small boat launch and recovery system which was done with teams from the Coast Guard's technical authority.  The close-in weapon system was live-fired for testing with a surface target.  Crewmembers also honed skills and earned qualifications in shipboard firefighting, damage control, aircraft crash and other shipboard emergency drills.

"This has been an extremely beneficial underway period for this crew, as well as for the Coast Guard," said Capt. Patrick Stadt, Bertholf's commanding officer.  "Completing dynamic interface tests as well as boat launch and recovery tests have paved the way for future Coast Guard operations."

Bertholf's crew also focused on law enforcement operations, exercising the crew's capability of deploying two boarding teams and a quick-response pursuit team from either the stern launch or side davit system.

"The National Security Cutter is the Coast Guard's most advanced and capable ship," said Rear Adm. Gary Blore, assistant commandant for acquisition, "and we are pleased that the ship's first operational patrol successfully demonstrated the abilities of this most important of acquisitions."

Bertholf is the first of eight planned National Security Cutters.  The NSCs, part of the Coast Guard's Deepwater major-acquisition program, will be the flagships of the Coast Guard fleet and will replace the 378-foot, Hamilton-class High endurance Cutters, which entered service during the 1960s.