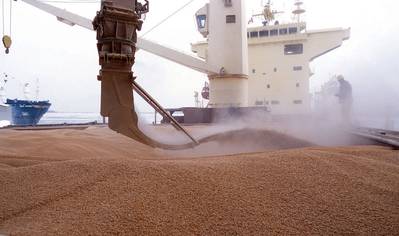 The Fednav Group presented with the IBJ award as Bulk Ship Operator of the Year in Hamburg, Germany.

This award highlights Fednav's contribution to maritime trade, as well as its leadership in the implementation of higher industry operating standards including efficiency, environmental protection, and safety.

In 2012, Fednav took delivery of 11 new vessels and currently has 12 ice-class ships on order to deliver in 2013-2016, including one ice-breaking bulk carrier to service Canadian Royalties' nickel and copper mine in the Canadian Arctic and six Lakes-suitable vessels designed to consume less fuel, reduce carbon emissions by 20%, and maximize cargo intake.

Before an international audience, Suzanne Bleau-Myrand, Director of Marketing for Fednav, accepted the Bulk Ship Operator of the Year award.  It is noted that this is the second time since the inception of the IBJ awards in 2009 that Fednav has received this prize. Also that year, Fednav's MV Umiak I won the Bulk Ship of the Year award. Additionally, at last year's event, Fednav Chairman, Laurence Pathy, received the Lifetime Achievement Award.

With nearly 70 years of experience, Fednav is a privately owned shipping company and is the largest international dry-bulk shipping group in Canada.