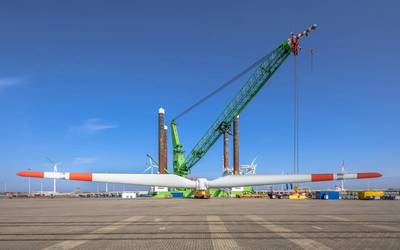 The U.S. House of Representatives has passed the Expanding Access to Sustainable Energy Act of 2019, which enforces Jones Act requirements for all offshore renewable energy production. However, the bill's current language has the potential to create a loophole that would leave the U.S. Jones Act fleet on the sidelines.

The Jones Act and its applicability to the offshore wind sector has long been debated by politicians, activists, and industry professionals. The act requires components transported between points in the United States to be moved by U.S. built, owned, flagged and crewed vessels. However, it's relevancy as to how it applies to offshore wind industry operations on the Outer Continental Shelf (OCS) has been questioned.

The latest amendment passed by the House of Representatives aims to clarify the Outer Continental Shelf Lands Act (OCSLA), a law developed in 1953 that governs offshore mineral and energy development. The new amendment would extend the OCSLA to apply to lease sales for non-fossil fuel energy sources, such as wind power. There are just two big problems with the new amendment: the words "producing or supporting."

While the OCSLA specifically calls out exploration and developing activities for oil and gas, the language offered around offshore wind only refers to production and support. The legislation defines coastwise points as devices permanently or temporarily attached to the seabed for the purpose "of producing or supporting the production of energy from sources other than oil and gas."

This language indicates that an installation on the OCS would be considered a coastwise point only when producing or supporting energy production. This verbiage would likely create a loophole where U.S. Customs and Border Protection (CBP) could interpret and rule that a wind turbine would not be considered a "coastwise point" under OCSLA until it is "producing or supporting" the production of energy.

If this language makes it through, it will open up transport or feeder operations during installation and construction to non-coastwise qualified vessels. This loophole could dramatically impact both the costs of installing offshore wind farms in the U.S. and the U.S.' Jones Act maritime sector's participation in offshore wind farm installation activities.

The bill will now go to the U.S. Senate, and if it is passed, it will be sent to the president's desk to be signed into law. Until now, this legislation has flown under the radar. Politicians and industry professionals should recognize the current language's serious ramifications on America's offshore wind future. These two words have the potential to either severely limit participation for the U.S. Jones Act fleet or significantly reduce costs for offshore construction and installation, spurring the industry to life. Either way, this bill's language is critical, and its impact will be felt for decades to come.