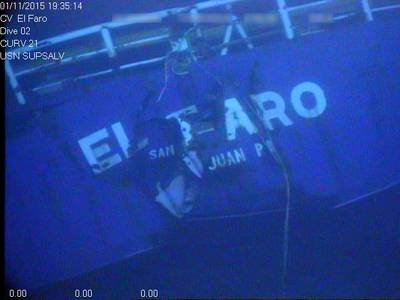 The sinking of the U.S. freighter El Faro in 2015 with the loss of 33 lives came after an overconfident captain set the ship and its poorly trained crew on a collision course with a hurricane, the National Transportation Safety Board said in its final report on Tuesday.
It was the worst U.S. maritime disaster in 30 years.
National Transportation Safety Board Chairman Robert Sumwalt said at the end of a day-long hearing that tracking the loss of the ill-fated ship on Oct. 1, 2015, was like watching a brewing storm.
“At first just a potential problem, then looming trouble, and finally, tragically, the disaster itself. The difference is, unlike storms, we humans can make conscious choices,” Sumwalt said.
The report said that Captain Michael Davidson ignored his mates’ repeated pleas that he change course to avoid a strengthening Hurricane Joaquin off the Bahamas.
According to the report, Davidson was relying on out-of-date weather information and declined to leave his quarters to alter course even as the 40-year-old cargo ship steered into the center of the hurricane blinded by lashing spray.
The National Transportation Safety Board panel found that a rigid bridge hierarchy contributed to the disaster because officers and helmsmen were reluctant to contest his decision.
Davidson, a veteran of Alaska shipping routes, refused to emerge from his cabin even when one mate told him of 100-mile-per-hour (160-km-per-hour) winds ahead, according to the report.
“This was every day in Alaska,” Davidson said, according to audio files from the vessel’s data recorder.
The National Transportation Safety Board panel approved 81 findings and 53 recommendations stemming from the sinking of the 790-foot (241 meter) freighter.
El Faro, operated by Tote Maritime Puerto Rico, disappeared two days after leaving Jacksonville, Florida, for Puerto Rico. The cargo vessel stopped communicating after reporting early on Oct. 1 that it had lost propulsion and was taking on water and listing.
The wreck site was found more than 15,000 feet below the surface of the Atlantic Ocean.
Investigators said the crew lacked training in areas including use of cargo stability computer software and damage control.
The panel said that the El Faro lacked appropriate lifeboats, and officers were unaware that there was a six-hour lag in information provided its Bon Voyage System weather software.
A preliminary report submitted to the U.S. Coast Guard found that the El Faro was operating with a minimum margin of stability and would not have met standards for a ship built today.
(Reporting by Ian Simpson; Editing by Daniel Wallis and David Gregorio)