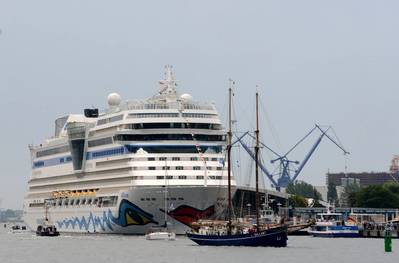 For the fourth time in a row, AIDA Cruises has agreed to sponsor a ship for one of these major public attractions of one of Germany’s biggest maritime festivals. Thanks to the support of the cruise company based in Rostock, the venerable Russian vessel “Kruzenshtern” will be a guest at the 27th Hanse Sail from August 10–13, 2017. The “Kruzenshtern,” a four-masted barque, which sails under a Russian flag, is the only remaining ship still in service from the famous Flying-P Liners fleet and it will form part of the impressive windjammer parade that will be taking place next weekend against the picturesque backdrop of Rostock-Warnemünde.

AIDA Cruises will be bringing two of the twelve ships in its fleet to Hanse Sail this year. On Saturday, August 12, 2017, AIDAmar will visit Warnemünde and AIDAdiva on Sunday, August 13, 2017. Both ships will be berthed at the cruise terminal from 8:00 a.m. to 6:00 p.m. The arrival of AIDA ships at Hanse Sail is always a great highlight for ship fans. Getting their respective seven and ten-day cruises to the most beautiful Baltic metropolises off to a great start, AIDAmar and AIDAdiva guests will enjoy the maritime charm of the festival and, when the ships set sail, they will have a spectacular view of Warnemünde from the pool deck.

On September 1, 2017, AIDAdiva’s season will end in Warnemünde with a real highlight: a transatlantic cruise to New York via Norway, Iceland, Greenland, and Canada. AIDA Cruises’ season in Rostock-Warnemünde ends on October 7, 2017, with the arrival of AIDAmar, which after stopping in Hamburg will also head off to New York.

In the coming year, AIDAdiva, arising from Gran Canaria, will open the new season on April 26, 2018 in Rostock Warnemünde. Warnemünde is the starting point and destination for four- and ten-day cruises to the pearls of the Baltic Sea, such as Stockholm, Copenhagen, Helsinki and St. Petersburg.

With 40 arrivals this year, AIDA Cruises is also the most important cruise partner of the Hanseatic City of Rostock in 2017 and a key economic factor for the entire region.