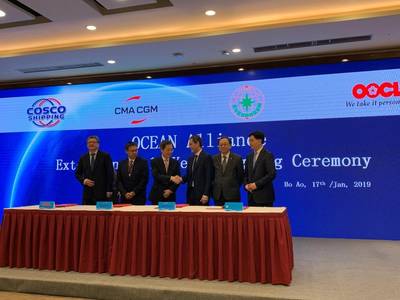 Partners in the world’s largest operational agreement between shipping companies have agreed to extend their alliance until 2027.

The Ocean Alliance, consisting of CMA CGM Group, COSO SHIPPING, Evergreen and OOCL, was launched in 2017 for an initial period of five years with an option for a five-year renewal.

The partners confirmed they will extend to the alliance's full 10-year duration, during a signing ceremony in Hainan, China on Thursday.

Rodolphe Saadé, Chairman and Chief Executive Officer of the CMA CGM Group, stated, “This new agreement with our Asian partners will enable us to propose to our customers an unrivaled and competitive service offering. It is a milestone in our development strategy. It reinforces the CMA CGM Group in its key position within the industry.”