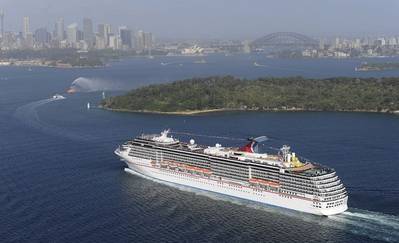 The search for an Australian couple who went overboard Wednesday from the Carnival Spirit cruise ship has been called off, the Associated Press reported.

The passengers, identified as Paul Rossington, 30, and Kristen Schroder, 26, went overboard in the waters off New South Wales, Australia. The couple was reported missing when the ship docked in Sydney on Thursday and have now been missing for more than two days.

It was reported that railing over which the couple fell was two inches higher than industry safety regulations mandate, making an accidental fall unlikely, according to Ann Sherry, CEO of Carnival Australia.

One of the ship’s 600 surveillance cameras showed the couple going over the railing about the same time with a brief pause between them, AP said. Investigators remain uncertain as they enhance the video to learn if the fall was accidental or a leap. No life preservers were missing from the ship.

The air and sea search spanned an area of nearly 5,000 square miles and was called off Friday without any sign of Rossington and Schroder. AP reported that heat-seeking infrared equipment was used.

Approximately 2,680 passengers were onboard Carnival Spirit, and its last stop was Mare Island in New Caledonia, which it left on Monday, bound for Sydney.

This incident adds yet another to a list of high-profile problems for the cruise line in recent months.

Last year, a passenger jumped from the Carnival Spirit but was quickly rescued by the vessel’s crew.