Who Pays for Mauritius Oil Spill and How Much? 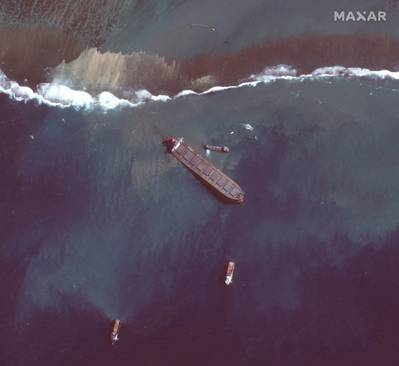 A Japanese bulk carrier struck a coral reef off the Indian Ocean island nation of Mauritius on July 25, spilling about 1,000 tonnes of fuel oil and triggering a state of "environmental emergency".

Scientists say the spill is the country's worst ecological disaster, killing wildlife and damaging pristine waters that attract tourists from around the globe. The full impact is still unfolding. As residents scramble to mop up the oil slicks, they are seeing dead eels and fish floating in the water as fuel-soaked seabirds limp ashore.

The following lays out the legal implications.

The ship and operator
The owner and operator of the ship is Nagashiki Shipping, an Okayama, Japan-based private company that said Mauritius had requested compensation. It said in a statement that the cause of the accident was not known and would be fully investigated.

The MV Wakashio, a nearly 300-meter Capesize bulker used for carrying iron ore, with a deadweight of about 200,000 tonnes, was built in 2007, meaning it should be double-hulled and more protected against rupture.

With a crew of 20 sailors the Panama-flagged vessel was on course for Brazil to pick up iron ore, according to Mitsui OSK, which chartered the ship. The bulk carrier had dropped off a cargo in Tianjin, China, before it headed across the Indian Ocean.

The operator has not explained why it was sailing so close to the reef.

The MV Wakashio passed an annual inspection in March without any problems, Japan's ClassNK inspection body has said.

Mauritius Prime Minister Pravind Jugnauth said on Wednesday that nearly all the remaining oil had been removed from the ship confirming an earlier statement by Nagashiki that most of the oil that was still on board had been pumped off.

Who is responsible?
Under the 2001 International Convention on Civil Liability for Bunker Oil Pollution damage, which is referred to as the BUNKER convention and has been administered by the International Maritime Organization (IMO) since it came into force in 2008, the owners of vessels are responsible for damage caused by oil leaks. That means Nagashiki rather than Mitsui OSK is liable.

In a August 13 statement, Nagashiki said it would "deal with compensation claims based on applicable laws".

Akihiko Ono, executive vice president of Mitsui OSK Lines, has apologized for the spill but a spokesman told Reuters it had no responsibility for the accident.

Liability
Compensation amounts paid by ship owners are governed by the 1976 Convention on Limitation of Liability for Maritime Claims and a subsequent amended convention agreed in 1996. The agreement also requires owners to ensure they have adequate insurance.

According to Toda Law Office in Tokyo, Mauritius has ratified the 1976 version, which limits payments to 2 billion yen ($18.7 million) while Japan has signed the 1996 document which has an upper limit of 7 billion yen.

It will be up to any court ruling on compensation to decide which one applies in this case.

Insurance
The Wakashio is insured by Japan P&I Club, the country's only organization that underwrites protection and indemnity insurance for ocean going and coastal vessels. On Wednesday, a spokesman for Japan P&I said it was "trying to make internal estimates" for how much the clean up would cost.

Jugnauth's government has said it too has yet to come up with an estimate.

Japan P&I could cover up to as much as $1 billion, because it can count on support from more than a dozen other shipowner insurance unions around the world, according to Koshiro Emura, an analyst at S&P Global Ratings.

Ship removal
Removing the ship will be a delicate operation and is likely to take months. France, which once ruled Mauritius as a colony, has said it will assist with the cleanup, while Japan said it is sending experts.