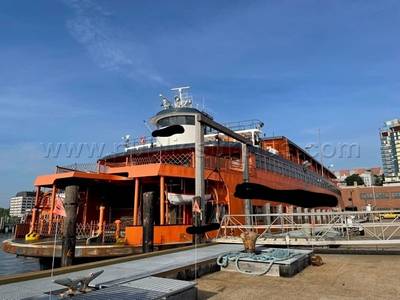 “The idea is to turn the space into a live entertainment event space, with comedy, music, art, et cetera,” Italia told The Post.

“We’re in the early stages, but everybody involved had the same ambition—not to see this thing go to the scrapyard,” he said.

The iconic double ended, passenger and vehicle ferry John F. Kennedy operated from 1965 until August 2021 when it was decommissioned and replaced by the recently completed Michael H. Ollis, the lead vessel in a series of three new Ollis-class ferries built by Eastern Shipbuilding Group.

The New York City Department of Citywide Administrative Services (DCAS ), which put the John F. Kennedy up for auction, listed the ferry in poor condition and said it had been removed from service due to mechanical issues with its propulsion system. Its hull is said to be in good condition.

The auction winners plan to have the vessel towed from St. George Ferry Terminal to a local shipyard, where it can be kept while a long-term location is found, Italia said. “We’re talking to a lot of shipyards in the area,” he added.