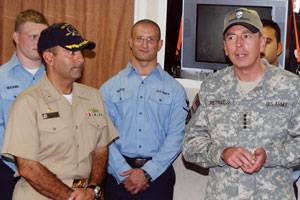 The head of U.S. Central Command visited the guided-missile destroyer USS Bainbridge while in port to thank sailors for their work while deployed to U.S. 5th Fleet, as well as for their role in the rescue of Richard Phillips, the Maersk Alabama cargo ship captain held captive by Somali pirates.

Army Gen. David H. Petraeus held an all-hands call with Bainbridge's sailors and presented awards to three sailors for rescuing Phillips after he was held by pirates for five days in April.

Petraeus presented Senior Chief Joel Steinbach with the Meritorious Service Medal, and Petty Officers 2nd Class Matthew Olin and Joshua Waters with the Navy and Marine Corps Commendation Medal for their exemplary service during the rescue.

Steinbach served as the chief negotiator and liaison between the FBI's Critical Incident Response Group/Crisis Negotiation Unit and the pirates holding Phillips.

Olin and Waters led a boat crew in the covert recovery of U.S. Navy SEALs, served as coxswain as their boats approached the pirate lifeboat holding Phillips despite coming under hostile fire on the initial approach, and navigated their boats alongside the lifeboat to direct negotiations for the release and subsequent rescue of Phillips.

Bainbridge Commanding Officer Cmdr. Frank X. Castellano said it was an honor to host Petraeus. He praised his crew for their role in the rescue and counter-piracy operations.

"The success of Captain Phillips' rescue belongs not to a single commander or a team of SEALs," Castellano said. "Those few days belong to everyone involved -- officers and enlisted, not on one ship, but several – who diligently stood their watch. It belongs to the many."