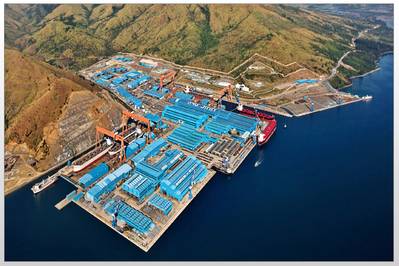 Philippine creditors are close to selling a strategically located but debt-laden shipyard north of the capital Manila, government officials said on Tuesday, with a North American company cited as being an investor in the deal.

Hanjin Philippines, a unit of South Korea's Hanjin Heavy Industries & Construction Co Ltd, in 2019 defaulted on $1.3 billion in loans, of which $900 million is owed to South Korean banks and the rest to five Philippine lenders.

Hanjin Philippines' shipyard previously employed 20,000 workers in Subic Bay, which is considered an important asset because of its shelter, deep water, and access to the South China Sea. Until 1992, Subic was home to a U.S. navy base.

In 2019, the government denied a report that it would bar Chinese companies from bidding for the shipyard over national security fears.

The shipyard could restart operations and welcome back workers by the end of the year, Wilma Eisma, chairperson of the Subic Bay Metropolitan Authority, told a news conference on Tuesday.

"Bottomline is, we are back in business," Eisma said, adding that the white knight was a North American firm without naming it.

In 2019, Australian shipbuilder Austal Ltd and U.S. private equity firm Cerberus were considering a joint bid for the facility.

"I assume it is the same group last year that is involved because I was not informed by Hanjin of another white knight," receivership lawyer Rosario Bernaldo told Reuters.

Cerberus did not immediately respond to a request for comment.

"Due to confidentially agreements we can't name the shipyard we are looking at, or our potential business partners," Austal said in a statement on Tuesday. Austal's strategy is to move into steel shipbuilding, including in Asia.