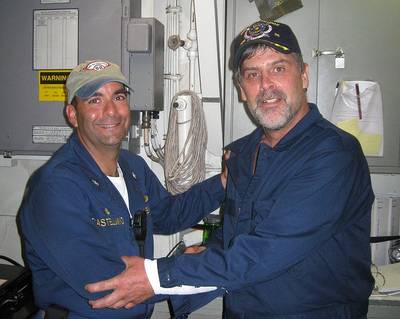 Capt. Richard Phillips, who was taken hostage by Somali pirates in 2009 and whose story is the subject of a new film starring Tom Hanks, will be joined at the National Press Club 10, October 2013, by Capt. Steven Werse, Secretary-Treasurer of the International Organization of Masters, Mates and Pilots.

Captain Richard Phillips, who survived a harrowing ordeal at sea in 2009 when his ship the Maersk Alabama was boarded by Somali pirates and whose story is the subject of a new feature film, Captain Phillips, starring Tom Hanks being released Oct. 11, will speak at a National Press Club Newsmaker the day before the film's opening.

In addition to discussing the film and his experiences at sea, Phillips will talk about pending budget cuts to the U.S. merchant marine caused by sequestration that could eliminate one- third of the ships used to haul military cargo. Other proposed cuts would eliminate American flagged ships from the federal Food for Peace program. One of the ships that may be on the chopping block is the Maersk Alabama.

Phillips will be joined by Capt. Steven Werse, Secretary-Treasurer of the International Organization of Masters, Mates & Pilots, the union that represents American bridge and deck officers.