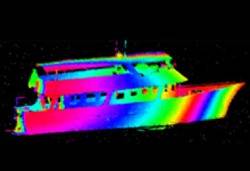 Hi-tech vision sensors to be fitted to Navy unmanned aircraft, distinguish between pirate boats & other vessels

Navy unmanned aircraft will be able to distinguish small pirate boats from other vessels when an Office of Naval Research (ONR)-funded sensor starts airborne tests this summer, officials said.

Called the Multi-Mode Sensor Seeker (MMSS), the sensor is a mix of high-definition cameras, mid-wave infrared sensors and laser-radar (LADAR) technology. It will be placed on a robotic helicopter called Fire Scout. Carrying advanced automatic target recognition software, the sensor prototype will allow Fire Scout to autonomously identify small boats on the water, reducing the workload of sailors operating it from control stations aboard Navy ships.

“Sailors who control robotic systems can become overloaded with data, often sifting through hours of streaming video searching for a single ship,” said Ken Heeke, program officer in ONR’s Navel Air Warfare and Weapons Department.  “The automatic target recognition software gives Fire Scout the ability to distinguish target boats in congested coastal waters using LADAR, and it sends that information to human operators, who can then analyze those vessels in a 3-D picture.”

Navy-developed target recognition algorithms aboard Fire Scout will exploit the 3-D data collected by the LADAR, utilizing a long-range, high-res, eye-safe laser. The software compares the 3-D imagery to vessel templates or schematics stored in the system’s memory.

The algorithms have been successfully tested in shore-based systems against vessels at sea. The software is being integrated into a BRITE Star II turret by a team from NAWCWD, Raytheon, FLIR Systems, BAE Systems and Utah State University for airborne testing aboard a manned test helicopter. The flight assessment will be conducted against groups of approximately seven small boats in a military sea range off the California coast later this summer.