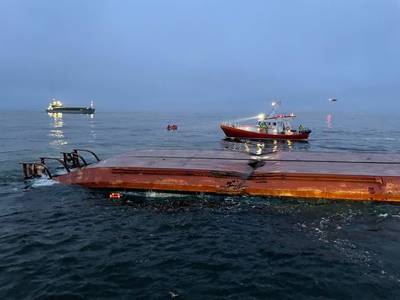 Two crew members on a British cargo vessel were found to be over the legal limit for drugs or alcohol after a collision with a Danish barge in the Baltic Sea that killed at least one person on Monday, the owner of the British ship said.

The 55-metre Karin Hoj barge capsized when it crashed with the 90-metre Scot Carrier off the island of Bornholm in fog and darkness early on Monday.

One of the two Danish crew members from the capsized barge was found dead in the hull. The other crew member was still missing.

The Swedish Prosecution Authority said in a statement that a preliminary investigation was underway into several suspected crimes -- gross negligence in maritime traffic, causing death through negligence, and marine intoxication.

It said a Briton and a Croatian had been take into custody but that it could provide no further details due to the preliminary nature of the investigation.

The company said it has a strict drug and alcohol policy in place and zero tolerance of any breaches.