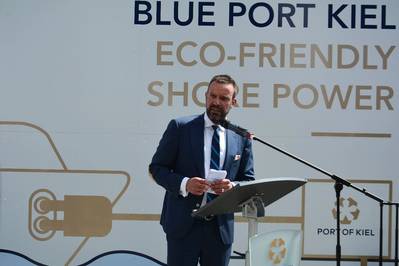 The Port of Kiel’s first shore-based power supply plant for shipping was officially inaugurated at the Norwegenkai on May 9th, said the Baltic region port.

With immediate effect, the Color Line’s big cruise-ferries can now be supplied with emission-free electric power from on shore.

Minister-President of the federal state of Schleswig-Holstein, Daniel Günther said: “By using power from on shore we are reducing to zero the emission of harmful substances as well as of greenhouse gas-es during the time ships are berthed in the port. Schleswig-Holstein supports this trend-setting project and will encourage further facilities of this type.”

Schwedenkai Ter-minal and the cruise shipping terminal at Ostseekai will follow the Norwegenkai example and are to get shore-based power supply capability for ships in the coming year.

Dr Dirk Claus, the Managing Director of the Port of Kiel said: “In future we want to be in a position to use shore-based electricity to cover 60% of the power requirements of ships calling at Kiel. That will mean we will be able to count our-selves among the most eco-friendly ports in Europe.”

The building contractor for the shore-based power plant, which was built by Siemens, is the Port of Kiel. Investment in the plant totalled €1.2 million, of which €400,000 was funded by the state of Schleswig-Holstein.